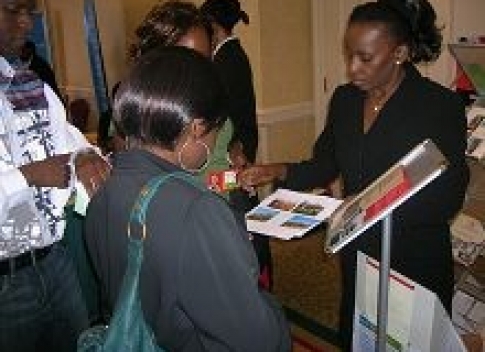 NEW YORK, September 2 – Pension L. Olerum is not Ugandan but that did not stop him from attending this year’s Uganda North American Association convention in New York. The Greenville, S.C-based Nigerian businessman chose to attend the annual gathering of Ugandans because he heard good things about the country’s real estate industry, he said.

“I’m thinking about investing in Africa and what I have gathered about Uganda’s real estate development is very impressive,” said Olerum.

Ugandan real estate development companies are in a quest to woo their countrymen into buying homes in their homeland. This is a new concept in a continent where most citizens abroad send money home to relatives to manage the building process for them. It’s very common for relatives in Africa to mismanage the projects, leaving them stalled.

“It is culturally important for Africans abroad to have homes in Africa,” said Rose Lubwama, a finance director with H L Construction Ltd., one of the developers at the convention. “We want to make it easier for them.”

It was the first time the Kampala-based company was appearing at the conference, Lubwama said.

Although it is good to have a house that is custom-made, Andrew Ekatan of Newark, NJ, thought it was a great idea to have the option to buy a finished one.

“Someone like me looking for a starter home doesn’t have the luxury to customize,” Ekatan said. “Maybe in 10 or 15 years I will.”

Houses in Uganda are much cheaper than in the United States. Prices range from $30,000 for a small single family home to $200,000 for a mansion, according to the developers.

“I already have a lot of experience here and having grown up in Uganda also helps a lot,” said Tindimwebwa.

That, Tindimwebwa said, gives him an advantage.

Although it was the first time for most of the companies to venture into the international market, representatives of all companies said they were prepared for the challenge of running an international business. For example, Anatoli Kamugisha, the managing director of Akright Projects Ltd., said his company was already operating in Tanzania, Rwanda and Southern Sudan.

Officials from all companies also described the convention as very promising for their businesses.

“We are just glad to share the information to potential customers. I don’t think any of us here expects to sell a house this weekend,” said Lubwama. “Buying a house is a long-term process. It’s not like buying a dress. No one goes out saying, ‘I’m going to buy a house today.’”

“I have already decided I’m going to buy a small house in Uganda and rent it out,” said he. “I just have to see which one of these guys to go with.”

Images from the UNAA convention are updated daily and are  available in the GALLERY section of mshale.com

Mshale coverage of the 18th UNAA convention is made possible by Kampala Wire.