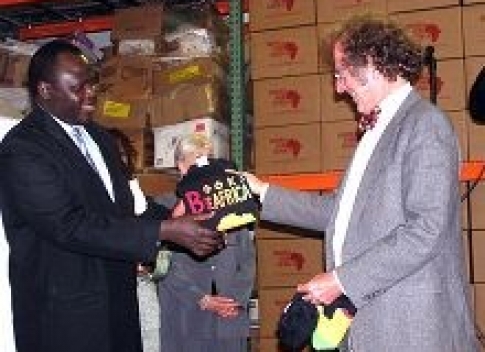 Books for Africa completed its move to a new spacious warehouse in Saint Paul’s East side today with the official opening of the facility by Tanzania’s Deputy Minister for Foreign Affairs and International Cooperation, Dr. Cyril August Chami. He is part of the delegation accompanying President Jakaya Kikwete to the Twin Cities. The president arrived here earlier today from New York where he has been attending the United Nations general assembly.

The new warehouse is located in the old Stroh’s brewery complex which was shut down in 1997. The neighborhood is referred to as the Phalen corridor to reflect the community reinvestment effort that has taken place in the last ten years after years of economic decline. Public records indicate to date $570 million has been reinvested along the corridor.

Books for Africa executive director, Mr. Patrick Plonski, said with over 14 million books shipped since its founding in 1988, the need for more space was imperative. In addition to more space, the new quarters are volunteer friendly than the old downtown Saint Paul location. Volunteers do the bulk of the sorting and packing of books that are dropped off by the public at the warehouse.

Dr. Chami thanked Books for Africa for the work it is doing and said the books go a long way in boosting literacy in his country. He invoked biblical teachings to demonstrate how dear Books for Africa is to his people. He said the organization’s work reminds him of that verse in the bible which says “For I was hungry and you gave me food, I was thirsty and you gave me something to drink, I was a stranger and you invited me in”, he said. He was referring to chapter 25 in the book of Matthew.

Ambassador Andrew Daraja, Tanzania’s ambassador to the US also underscored the importance of Books for Africa by reminding the audience it was one of his first stops when he was appointed to Washington. The ambassador holds concurrent accreditation to Brazil, Mexico and Venezuela.

To mark the grand opening, Books for Africa will be shipping two 40-foot containers of textbooks equating to about 70,000 textbooks to Tanzania. The United States Agency for International Development (USAID) and St. John’s Abbey, a monastic community located in Collegeville, Minnesota each are sponsoring additional containers to go to Tanzania.  Minneapolis based Cargill, the world’s largest privately held corporation, also sponsored a half container to go to Tanzania. Preferred Adventures of Saint Paul stepped in at the grand opening to make the container whole.

The Michigan based Andrah foundation is also sponsoring a container to Tanzania. The foundation’s cofounder, Ruth Knoll, narrated an experience she had while visiting Tanzania. A school that was in need of books needed them right away but in her mind she was thinking of a two year process “I called the embassy (Tanzanian) and they told me about Books for Africa”, she said. She added Books for Africa simplified the process for her to a matter of days.

Also announced at the grand opening of its new warehouse was a new partnership between Books for Africa and USAID. In USAID’s Africa Education Initiative (AEI), Books for Africa will be shipping 16 containers of textbooks valued at $2.7 million to seven countries. The AEI is a $600 million multi-year initiative by the Bush administration that “supports training of new teachers and provides more textbooks and scholarships for children throughout Africa,” according to information on the USAID website.

Visit Mshale’s gallery for pictures from the event.