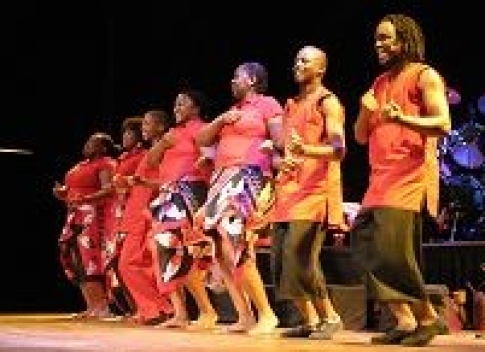 Entertainment gift-wraps a wide variety of messages.  Spirituals map out the path to freedom and Barney the dinosaur dresses up common courtesy in nursery rhymes.  Now there’s a South African choir extolling the merits of safe sex.  The singers even add a measure of visual emphasis.  When two of the men wrap a leg around the hip of their dancing partners, the men are theatrically shoved to the ground until they produce, from their pockets, a fresh condom for use in the suggested forays.

Friday evening, September 22nd, at The Woman’s Club of Minneapolis over 250 people gather to hear music from South Africa as presented by Siyaya choir and band.  The performance venue, stepped up from last year’s show in a church basement, swells the number in the audience accordingly.

The quality of the music remains steadfast.  Actually, since the choir performs on a stage with a superior sound system, I enjoy myself much more this year.  Additionally, local singer and actor, T. Mychael Rambo, known for his work in the Twin Cities for his role as the Minister in Penumbra Theatre’s Black Nativity takes the stage mid-way through the show to describe his recent visit to South Africa and his interactions with the JL Zwane Community Center and Siyaya.

The show opens with Louie Armstrong’s Wonderful World and continues with an eclectic mix of traditional American, African, and full-throated choral numbers.  Since some of the choir also performed with the JL Zwane Community Church, they seem quite comfortable with such diverse selections.  Between the first set and the second set featuring drumming and more animated dancing, T. Mychael Rambo appears.

Rambo solos with Motherland, found on his jazz-infused CD, Simply.  He intersperses his narrative about his trip to Guguletu Township with his own song, Chasing the Sun and a traditional gospel number, Ain’t Gonna Let Nobody Turn Me Around.  Finally we hear, Cry, Beloved Country, also composed by Rambo.

Then the choir returns to the stage and together they sing John Lennon’s classic, Imagine.  This number alone makes the entire evening worth every penny.  I dearly wanted to close my eyes and saturate myself in their voices, but the visual with color and movement compelled me to keep my eyes open.  I’ll carry the power they brought to this song with me for days.  Lennon’s piece, while not specifically religious, invoked an explicit spirituality that filled my heart and soul as ably performed by Siyaya and virtuosic Rambo.

Drumming dominates the second set, which greatly appeals to me.  Cheryl Chute, finance director at Open Arms, comments that the audience includes a whole mix of people.  I notice several teens from Central High School in St. Paul.  And I notice their interest in the chirps, clicks, whistles, and twitters emitting from the singers.  One young woman in particular, superbly emulates the dance moves, bridging, if you will the grind of hip hop with the rhythmic pounding of African dance.  She is a treat to watch.