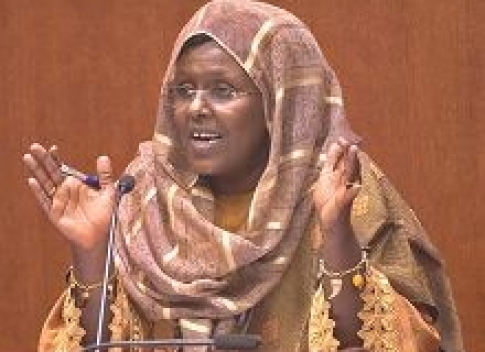 MADISON – The Chinese philosopher Lao Tzu once said, “A journey of a thousand miles starts from a single step.” Asha Haji Elmi’s journey to politics began when she was in college. This was before the war in Somalia. Even then, Ms Elmi was a strong voice for those who could not voice their opinion.
Born into a middle-class family in Somalia, Ms. Elmi grew up in a family that valued women and invested in her education. She graduated from Somalia National University (SNU), in 1986, and several years later got two Masters degrees, one in Management and Organizational Development and another in Business Administration from the United States International University (USIU) in Kenya.
.
Ms. Elmi is a member of parliament in Somali’s transitional government. Ms Elmi, fellow, Kennedy School of Government, Harvard University is the founder of Save Somali Women and Children (SSWC) and the chair of the Sixth Clan.
Women Advocacy
Ms. Elmi was the guest speaker at this year’s Women’s Executive Leadership Summit at the University of Wisconsin-Madison last month. She was invited to share her experience as a leader in Somalia. The three year old network building summit brings together CEOs and accomplished provocative leaders to ‘challenge and inspire’ attendees about their own leadership. Previous summit speakers have included leading corporate executives such as recently retired Tennant Company President & CEO, Janet Dolan and Joseph Hogan, General Electric’s President and CEO for the Healthcare Division.
This year, the summit’s goal was to equip women leaders with strategies and skills to create sustainable results and “drive change and success” in their professional and personal life.
Save Somali Women and Children
In a male dominated society, where women have not traditionally had leadership roles, Ms Elmi has stood out. She has been a strong advocate of peace and fair treatment of women. As an advocate for women’s rights, Ms Elmi is confident that Somali women will contribute positively to Somali’s transition into a state of normalcy.
Led by clan-based warlords, the war in Somalia has left the women with new roles. With the war taking the lives of their men, Somali women have been forced to become the sole breadwinners of their families to sustain their community. According to Ms. Elmi women’s voices have risen in protest against the violence. It is this protest, among other things, that has helped bring some relative peace to Somalia bringing the leader of the Islamic Courts to power.
Save Somali Women and Children (SSWC) is an initiative that began in 1992 comprising a cross-section of women in Somalia. Under Ms Elmi’s leadership, SSWC has reached out to women from different clans in Somalia, all with a common commitment– that of bringing peace to Somalia. SSWC has mitigated inter-clan conflict. Its biggest accomplishment, however, has been the creation of the Sixth Clan. Much of the war in Somalia has been fought by clannism with warlords from different clans clamming for power.
During several failed Peace and Reconciliation Process conferences only male leaders, representing the five major clans of Somalia, have been consulted. Led by Ms Elmi, SSWC proposed the creation of a sixth clan. This clan they argued would represent women, who traditionally could not be clan leaders, therefore had no say in the future of the country. After its official recognition, the Sixth Clan has been able to set a quota in a resolution allowing for women members of parliament. As a result, there are 23 women members of parliament in the Somali transitional government.
It was against this background that the strength of Ms. Elmi’s leadership was tested. She was soon faced with new challenges—challenges that began her quest for identity, and continued her zeal in representing the under served.
Abdulkadir Mohamed of Minneapolis, a nephew to Ms. Elmi, was excited to hear her speak in Madison. She has been a source of inspiration for him and sees her as a leader in the future of Somali politics. Abdulkadir who recently graduated from St. Mary’s University where he studied International Business does not hesitate as he says ""Asha is Somalia’s Ellen Johnson-Sirleaf (president of Liberia) and Wangari Maathai (Nobel Laureate). She is the hope for Somali women, as they are liberated from male chauvinism, and begin to participate in the political arena of Somalia."
Educating the Public– both Men and Women
Ms Elmi also spoke to an Anthropology class at the University of Madison on her role in empowering Somali women within the context of Islam. “How could I say I am a representative of the people if I cannot protect them?”
In a community where Female Genital Mutilation (FGM) is deep-rooted and believed to be a cleansing ritual, it is imperative that one creates a medium of trust within the community while discussing alternative ways of initiation. In addressing FGM, Ms Elmi has met with religious leaders and community members to reinforce that FGM is not a Muslim practice winning people over. Because women are often chastised when not circumcised, Ms Elmi’s campaign involves educating men on the health risks associated with FGM.
Her challenge is a daunting one. With no central government in Somalia, how does one make sure that laws are enforced? While acknowledging there is a huge gap because of this, Ms Elmi is confident that education and financial empowerment are powerful tools in fighting for justice.
In this respect, Ms. Elmi has chaired the Somalia-National Committee on Female Genital Mutilation and Harmful Traditional Practices (FGM/HTPs), which is incorporated into the Inter African Committee on FGM/HTPs.
Current Affairs in Somalia
Currently, Ms Elmi resides in Nairobi, Kenya, but commutes to Somalia where she continues her work. In meetings with the leaders of the Islamic courts, Ms Elmi has expressed her concerns asking them to uphold women’s rights and to support her work.

"The International Community cannot change social attitudes in Somalia, the change has to come from within Somalia." She says.