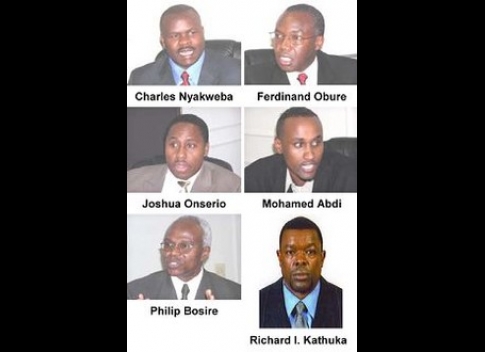 Against a colonial background, and a couple of decades of finding its political journey, Kenya continues to seek effective political leadership. Like most African countries, there has been a flight to the Diaspora by thousands of Kenya in search of greener pastures. While the Diaspora hosts some political refugees, most Kenyans leave home for education and economic gain. Minnesota is home to over 5,000 Kenyans. With a stable political environment, many Kenyans in the Diaspora feel a need to go back home and participate in the development and change of the country.
There is an unprecedented number of Kenyans in Minnesota aspiring for public office in next year’s General Election. Presidential and parliamentary will be held later in 2007. They visited Mshale’s editorial offices to discuss their vision for the areas they aspire to represent. Philip Bosire, Charles Nyakweba, Joshua Onserio, Ferdinand Obure, and Mohamed Abdi participated in a candidate meeting at Mshale on November 21. Also in the profile is Richard Kathuka, who lives in Illinois and Thomas Nyambane of Minnesota. Their experience living and working away from home has made them want to directly participate in the political, social, and economic development of Kenya.
Like all Kenyan politicians, they are faced with several challenges, the greatest of which is delivering on their promises to an already disillusioned electorate. Recent polls conducted by Strategic Public Relations and Research, a survey firm based in Nairobi, Kenya, have shown that Kenyans are more interested in issue-based campaigns rather than the usual political rhetoric. From November 3-7, 2006, 3,008 people were interviewed in all regions of Kenya.
The general consensus from these parliamentary aspirants is that there is a need for fresh ideas. With their professional experience acquired from the West, they hope to offer different solutions to Kenya’s development needs. Due to extreme poverty, many voters are easily bribed during the weeks preceding elections. The aspirants have committed themselves to invest in voter education where they will discuss their issues. Most of the aspirants would like to confer with their constituents, when they go back to Kenya in December and January to begin their campaign, before declaring their party affiliation.
The recurring theme from all the aspirants is the need for transparency by Members of Parliament (MPs) while serving their constituents. They recognized that some progress had been made by the current government, headed by President Mwai Kibaki, but said more was yet to be achieved. Initiatives lauded include: Constituency Development Fund (CDF), monies that allow local residents to spend money on their development initiatives, and free primary school education.
Mohamed Abdi (Mandera East, Mandera)
A young man from Mandera in the North Eastern province of Kenya, Mr. Abdi is excited about the prospect of winning. He is aspiring to represent the Mandera East constituency in Mandera District. The financial support that Mr. Abdi has received from the Diaspora community and his American comrades will allow him to have an effective grassroots campaign that will reach all individuals. He feels he will be a better representative to his potential constituents because the incumbent is a member of the old guard, mired in allegations of corruption and far removed from the issues affecting the common man. Mr. Abdi would like to fight corruption from the top. He argues that the money “stolen” by junior government officials is nothing compared to that pocketed by senior government officials such as MPs. A few months ago, Mr. Abdi met with Mshale to discuss his goals for Mandera.

Mr. Abdi discusses his vision further, for Mandera East, on his website.
Philip Bosire (Kitutu Masaba, Gucha)
A certified accountant in Kenya and the US, Mr. Bosire prides himself on his money-managing skills. Most MPs, he argues, are not in touch with their constituents since they don’t leave the capital city, Nairobi. To remedy this, he promises to hold frequent meetings with his constituents. On the youth, Mr. Bosire affirms a need for the government to dedicate specific funds to address their needs. Through the formation of a youth co-operative, the youth in Kenya will have positive interaction with each other where they can create income-generating ventures. While he recognizes the importance of women in the legislature, Mr. Bosire says, “Let us not underrate women. If we cannot have women on the ballot, we should find other ways in which they can participate, such as committee members of not only parliamentary committees, but also local ones.”
Mr. Bosire is the CEO and founder of P & N Services Inc. He is also the Chair of the following community organizations in Minnesota: Minnesota Kenyan International Association (MKIDA), and Kitutu Masaba Wayforward Organization and a church elder with the Kenya Community Seventh Day Adventist church.
Richard Itumo Kathuka (Kangundo, Machakos)
A member of FORD (Forum for the Restoration of Democracy), Mr. Kathuka has a clear vision on his goals should he get elected. His campaign addresses basic needs: water, healthcare, education, roads, agriculture, insecurity and issuance of title deeds.
Machakos has been hit by severe drought over the past few years. “My goal in this [water] regard is to rehabilitate existing boreholes and sink new ones to ensure that all the townships within the constituency have clean piped water within my first five years as the area member of parliament. This will be done by utilizing the Constituency Development Fund-CDF. “
On his website, Mr. Kathuka has outlined more of his goals.
Charles Nyakweba (Bobasi, Gucha)
Over the years, Mr. Nyakweba has increased his experience working to serve people. He began his career as a lecturer at the Rift Valley Institute of Science and Technology in Kenya. He strongly believes in the revival of polytechnics, which are technical schools that offer hands-on training in sectors that are relevant to a maturing economy. If elected he will push for the creation of apprenticeship programs that will allow the youth to train in productive farming and fishing is essential in entrusting the land back to the people. Currently, to head start this initiative, Mr. Nyakweba has partnered with Bayer East Africa, Kenya Seed, and the Fisheries Department.
“We need to empower the people, not only politically, but also economically,” he asserts.
Mr. Nyakweba hopes to work with other parliamentarians in developing a country where every individual has the opportunity to gain employment and live a decent life. He disagrees with the current structure of distributing funds to local constituencies through CDF saying it is flawed where MPs are in charge of the funds. As an MP, Mr. Nyakweba would push for an amendment to the CDF Act outlining professionals, educated individuals, as the ones in charge of constituency funds.
Mr. Nyakweba is a Mortgage Consultant. For two years, he also served as the Vice Chairman of Mwanyagetinge, a Kenyan community organization in Minnesota.
Thomas Nyambane (Bobasi, Gucha)
Kenyans continue to be disenfranchised as an electorate, and it is Mr. Nyambane’s hope to change this. He is keen on fostering relationships with other communities around his constituency while uniting those within his. His main focus if elected will be on rural electrification, abandoned children, tea export and women empowerment.

There is still a stigma attached to children with special needs, both mental and physical disabilities. Mr. Nyambane would like to sensitize his constitution and educate them on catering to the needs of these children. CDF, he contends, is one of the best things to happen to the people of Kenya. He will create a grassroots committee that will prioritize the needs of the constituency allowing the citizens an opportunity to have a say in their local government.

"Kenya is a subsistence economy relying heavily on farming. However, the farmers do not get adequately accommodated for their goods. I will educate the farmers on market prices, and cut out the middle man to increase the gains the farmer makes."

On farming, Mr. Nyambane will also work with the Ministry of Transport to ensure that the infrastructure will support transport between trading ports.

He will be running on a Kenya African National Union ticket.

Ferdinand Obure (Bomachoge, Gucha)
Mr. Obure is not new to the Kenyan political arena. He was an MP before moving to the United States. His view is that the Kenyan constitution is supposed to educate the masses, it is therefore, important to let citizens know the articles in the constitution. While campaigning, and if elected as an MP, Mr. Obure will invest in educating individuals on their citizenry rights. Some areas in Kenya are less developed than others, Mr. Obure stresses on the need for equal treatment on the national level to assure national coherence and identity.
When parents spend thousands of shillings in educating children, it is disheartening for them to have their children unemployed by an economy that cannot support itself. Mr. Obure will work toward the revival of polytechnics and recreational centers to keep the youth busy. Kenyan students, to compete with the rest of the world, need to be prepared for the 21st century: the government needs to invest in this. Mr. Obure argues that the West continues to rob Africa by enticing the educated African to build their economies.
Mr. Obure points out that, “The Kenyan in the Diaspora will never fit into this society. We need to emulate the development of the Jews. They have created networks across the globe sustaining Israel.”
Mr. Obure would like the government to have a specific fund for the campaign of women MP aspirants to allow them fair competition since they have sustained the Kenyan economy.
Joshua Onserio (Bobasi, Gucha)
Once bitten twice shy. Well, not Mr. Onserio who serves a board member in the Maple Grove school district in Minensota. This is his third time running for office, and he feels his odds are better than before. Losing to his opponent, has not slowed down Mr. Onserio. Eight years ago, together with other youth, Mr. Onserio opened a primary school that was named after him. His interest in the development of his people has led him to hold leadership seminars for the youth in Bobasi. His work entails empowering the youth on their rights as an electorate.
“Working on a small budget, my success from my humble background has taught others that money does not rule.”
As a financial consultant, Mr. Onserio says he has learnt the importance of proper management and delegation and will use these if elected. He is keen on creating investment opportunities not only by creating an enticing economic environment, but also by fostering relationships with foreign investors. He would like to serve Kenya as a Foreign Affairs minister. He is CEO of United Home Lending, a mortgage company with a sprawling office in Plymouth, Minnesota that he founded
Education on basic rights and general information such as family planning, AIDS, formal education and domestic violence are paramount to his campaign.