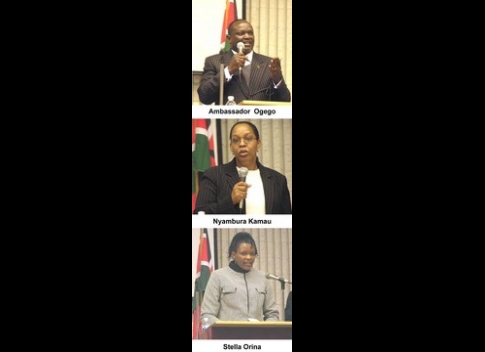 The recently accredited Kenyan ambassador to the United States, Peter Nicholas Rateng’ Oginga Ogego, urged his nationals to register with the embassy to make the provision of consular services to them easier. The ambassador who got posted to Washington last September, also pledged to make available his itinerary on the embassy’s website. The ambassador was speaking in Minneapolis during a hurriedly called town hall meeting with Kenyans here. He was in town for official business.
The ambassador, who has received a warm reception from Kenyans in the United States, outlined the reforms he has put in motion at the embassy in an effort to streamline and make it easier for Kenyans to access services at there. Veteran Kenyans here have likened him to the popular Ambassador Dennis Afande who served through the early 1990s and was widely perceived as accessible and open to engaging Kenyans.
He asked those in the audience of about 100 to view the embassy as an ally during their stay here. In that regard, he said he is in favor of dual citizenship and described his efforts in the past to encourage members of parliament to introduce a bill in parliament to that effect. "We are there for you and have no hidden agenda," he said during brief remarks before engaging in a lengthy question and answer session. He said that he believes the best way to approach the issue of dual citizenship for Kenyans is to de-link it from the constitutional reform agenda and introduce it as a standalone bill in parliament. Kenya does not currently recognize dual citizenship and the issue ranks high on the agenda for Kenyans residing abroad.
He said he has put in motion a revamping of the Information Technology infrastructure at the embassy to better serve his nationals. Ambassador Ogego was accompanied by the embassy’s First Secretary for legal affairs, Stella Orina and Nyambura Kamau, the Consul General at the Kenyan Consulate in Los Angeles. The ambassador was full of praise for Ms. Kamau for the work she put into reopening the consulate in Los Angeles which was closed for fifteen years.
The trio described themselves as a “great team” with each easily deferring to the others’ area of expertise. Ms. Orina explained the intricacies involved when the US government gets ready to deport a Kenyan national and how she becomes involved in her role as the Legal Secretary. She stressed the importance of not falling foul of the law. She told the audience that when arrested, they should ask to speak to a consular representative as the law requires. She also urged those present to be on the lookout for trade opportunities for Kenya and to get in touch with the commercial attaché at the embassy.
Ms. Nyambura echoed Ambassador Ogego’s call for Kenyans to register. She described how frustrating and heartbreaking it was for her not to provide an estimate of how many Kenyans may have been affected by Hurricane Katrina. That region of the country affected by the deadly hurricane is served by her consulate. The ambassador also announced that Minnesota will be served by the Los Angeles consulate for consular services going forward.
The capabilities of the consulate in Los Angeles are a little known secret according to Ms. Nyambura. She said the consulate can do virtually everything the Washington embassy does including passport renewals and turnaround times may be faster.
During a lively question and answer session, Ambassador Ogego responding to a question from local physician, Dr. Edwin Bogonko, said he was not aware of the number of Kenyans incarcerated and the rising HIV/AIDS infections amongst Kenyans in the state. Stating that he is aware the challenges presented by the disease, he asked those present to sensitize the wider Kenyan community on the matter. He commended Mwanyagetinge Umoja which organized the town hall meeting for its health seminars. Mwanyagetinge is a Kenyan organization in Minnesota. The ambassador shared with the audience that he convened the first HIV/AIDS conference in the Nyanza province of Kenya leading to then Present Moi declaring AIDS a national disaster. He has in the past served as the consulting director of Jaramogi Oginga Odinga Foundation a Kenyan charitable organization that focuses on HIV/AIDS and poverty.