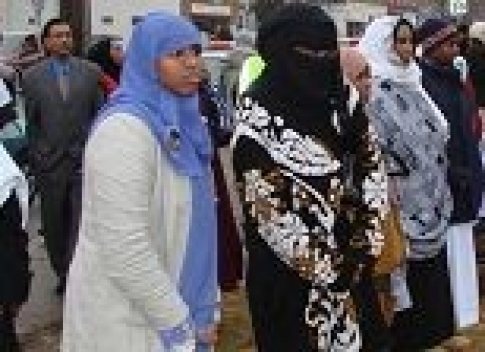 Ali Jumale strode with his wife and four children Saturday to a protest in Peavey Park that attracted hundreds of Somalis, who stridently denounced Ethiopian troops for forcing its way deep into Somalia in the hopes of asserting the authority of the weak government.

“Our country is humiliated,” said Jumale, 51, who also blamed the U.S. for tacitly approving “Ethiopia’s aggression.”

That “aggression” happened last week when Ethiopia, a country most Somalis hold animosity toward, dating back to centuries of conflict, sent upwards of 20,000 soldiers to subdue the power of the unflinching Union of Islamic Courts (UIC), which was swiftly gaining control of most of Somalia, while the internationally-backed Transitional Federal Government (TFG) was rapidly losing soil and support.

UIC gained control of Mogadishu and much of South-Central Somalia six months ago and restored semblance of law and order after defeating notorious warlords, widely believed to be financed by U.S. clandestine services.

In a stunning reversal of fortunes, TFG forces, riding Ethiopian tanks and armored vehicles marched into Mogadishu on Friday. For TFG, it was a remarkable victory secured by the superior firepower of Ethiopia, which also celebrated a milestone for gliding in to the capital of its historic foe.

Jumale was among a throng of Somalis, who after celebrating their holiest feast, Eid Al-Adha, flocked to Franklin and Chicago Ave., on a rainy day to express their disdain with Ethiopia’s move, which defied a recent U.N. resolution off-limiting neighboring countries to engage Somalia militarily.

The U.S. State Department initially said that “Ethiopia has legitimate security concerns,” but on Friday called for a “power-sharing dialogue” between TFG and UIC.

Ethiopian forces resurrected most of the thorny Mogadishu warlords, —a move that protestors say is emblematic of its real intentions. Some of those warlords fought against Americans in the failed 1993 Operation Restore Hope, which engulfed the lives of 18 Americans, portrayed in the film “Black Hawk Down.”

“I’m aghast by [Ethiopian] actions,” said Abdirizak Haji Hussien, former prime minister of Somalia in the 1960’s. “We want them out immediately.”

One after another, protestors seemed to blame the U.S. for being complicit, or indifferent about “the violation of Somalia’s sovereignty by its arch enemy,” said Hassan Mohamoud, president of Somali Institute for Peace and Justice, (SIPJ) which organized the rally.

The boisterous crowd, estimated at three thousand by some, was one of the largest in Minnesota. But some say it’s far from reflecting a unified voice among often polarized community.

“The reality is that there are many people who think Ethiopia is the magic bullet in Somali turmoil,” said Fardowsa Abdi, who stayed in her car, parked within earshot of the rally.

“While I’m hesitant about Ethiopians in particular, I’d support foreign intervention of some kind.”

Some members of the Ethiopian community said they don’t sanction their government’s attack in Somalia.

“Everyone knows that [Ethiopian prime minister] is deflecting attention away from his internal crisis,” said Sam Deganu, an Ethiopian businessman who said he came to the rally to show solidarity and to clarify that all Ethiopians aren’t in line with the war. “The Somali war has the hallmarks of Iraqi war, except that it has far less support among us.”

That view is echoed by many experts, who noted that the European Union has recently halted million of dollars in humanitarian aid to Ethiopia, after learning the latter’s grim record.

Another fear, some protestors say, is that Mogadishu could become another Baghdad, where asymmetrical war is waged against Ethiopian occupation.

Calls for withdrawal
In the U.S., Congressman Donald Payne of New Jersey, a Democrat, who’ll be heading the African Subcommittee in the House next month, called Ethiopia’s action an “ill-advised measure that will further destabilize and increase the suffering of the Somali people.”

“I strongly condemn this aggression and call for the immediate withdrawal of Ethiopian and all foreign forces from Somalia.”

The African Union and the Arab League, both of which Somalia is a member of, also called Ethiopia to withdraw.

But Ethiopian premier said that he wouldn’t heed those calls until he gets the job done—a statement seen by many Somalis as an open-ended stay in the country.