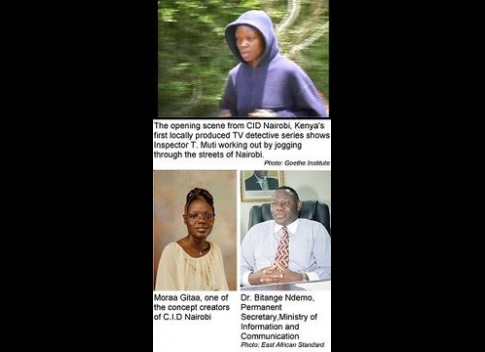 From one corner of the street to another sweating a sign of commitment in her work is what welcomes the viewers – the TV series “CID Nairobi”.

A thrilling police detective television series based on crime commonly experienced in the Kenyan capital of Nairobi-the throbbing heart of East Africa-is in the making.

The series becomes the first of its kind in Kenya to focus on crime in the modern capital of Nairobi.  If aired in major Kenyan television stations, East Africans and the entire world would have a chance to watch the thrilling episodes captured in their soil by one of their own.

This is because two major television stations in Kenya-Kenya Broadcasting Corporation (KBC) Kenya’s state broadcaster and NTV, a private television owned by the Nation Media Group-are connected to DSTV, a South African firm that uses satellite to broadcast.

The series dubbed “C.I.D Nairobi” results from the screenwriting workshop conducted by Mr. Martin Thau, Drehbuch Werkstatt Munchen, and German Film makers in September 2004 and May 2005 sponsored by the Goethe-Institute.

CID Nairobi shows the daily work and life of a scratch team of police officers who have to cope with capital crime and their often-incompatible ways to solve it.

While following them on the job, viewers will get to know every level of contemporary Kenyan society, from the places of the rich to the office world of a sparse middle class to the countless huts of the less fortunate.

Inspector T. Muti ­ Aimee Onguso finally always gets the viewers to see the whole truth. She is a tomboy in her mid-twenties who studied hard at police academy and is still full of enthusiasm.

Shifty Shime is the police station’s corporal, and superintendent Kamade-Paul Ramtu has the right connections to always rescue his officers, justified or not. Kabone, a young artist of all trades, is Muti’s boyfriend.

While launching the TV series at the Kenya National Theatre, in Nairobi on January 11, Kenya’s Information and Communication Permanent Secretary Dr Bitange Ndemo termed the production as “a milestone in Kenya’s film industry”.

Addressing participants at the launch, Ndemo said Kenya is in the process of achieving great heights in the film industry.

He said the production of this series rekindles the past television series that had taken Kenyans by storm aired in the 80’s.

During this time, it was a common phenomenon in most Nairobi homes to find families their eyes glued to television screens watching Tahamaki, Vioja Mahakamani-a local court TV drama, Penzi Hatari among others.

“CID Nairobi presents the modern situation of crime and its impacts in Nairobi,” said Ndemo. He adds “Kenya has potential in terms of artistic and talent that really needs to be exploited to capacity.”

According to Moraa Gitaa the end of the 2004 workshop marked the beginning of the development of the TV crime series.

“Personally, I’ve never attended a TV Crime Writer’s Workshop before. Upon seeing the advert in the papers calling for scriptwriters, I applied and was thrilled upon being selected as one of the 10,” says Moraa.

Attendants at the workshop learned several steps on how to write a crime episode script.

“On my part it was a huge sacrifice coz I work in Mombasa and I was on a contractual basis, I had to travel to Nairobi every Thursday evening for our meetings every Friday morning, and this took all of one year,” she says.

Moraa had to meet to review the first drafts, second drafts and final drafts for very scriptwriter’s episode.

In 2006 the crew selected a PR & Marketing department that was headed by Mrs. Njoki Muhoho, who is one of the script writers and a Director of Tack International.

“Most TV stations requested and advised that we at least shoot 2 pilot episodes for promotional purposes,” she says.

Moraa, who recalls the ups and downs of the production, identified funding as a problem.

“This is because some of us were in between jobs and others were yet to secure jobs. Others were working on other projects, because we are all part time writers,” she says.

“Finally as we kept stumbling on snag after snag one of us, Cajetan Boy a prolific playwright got some friends together and shot the pilots”.

An example of a helping hand for the production was the Cinematography by Willy Owusu and the Editor Aleks Kamau.

All the actors were volunteers as there was no money to pay them.

The Launch of the pilot episodes was part of a Public Relations campaign to get funding and sponsorships from a number of foundations.

They include the International Ford Foundation, Kwani Trust and Kenyan TV stations such as KTN, NATION, KBC and CITIZEN.

Moraa also prepared a budget and proposal covering all the episodes, taking into consideration the final episode CRIME OF PASION, which is hers, to be shot on location in Malindi, an Indian Ocean resort town located 75 miles north of Mombasa, Kenya’s second largest city.

According to Ingolo Wa Keya a Kenyan film producer, he applauds the efforts of the CID film makers.

“I liked the concept. It was a well thought concept that captures the viewers attention. The story development is good and brings out the concept of the movie,” Ingolo says.

He also adds that the shooting, way of acting and scripting of the films was amazing. The choice of actors was impressive as they act professionally.

He says that though local detective films are scarce in Kenya, CID was enticing and will attract local viewership.

“The film will Impart knowledge to Kenyans and there is need to have more workshops in order to make film industry better,” Ingolo said.

He believes that this could be an eye opener for the return of development of detective’s film productions. An area that Kenyans have shown they can develop. He however terms the current situation of film in Kenya as crawling losing out in profits compared to other African countries.

“We need to have get things happening every other time to be classified as nation with a developed film industry,” says Ingolo.

He however attributes the current situation of film industry in Kenya on environmental structures in terms of film expenses, artistic development among others. He says though the development of film expenses have slightly gone down with the entry of digital technology a lot needs to be done.

He says most Kenyans are not technically empowered. “Kenyan film makers lack exposure in the detective industry,” he adds. He says there have been persistent calls on the Kenya Film Commission a Government parastatal to improve the capacity of artistic content of those willing to join the industry.

“For most film producers, where to screen their work has become the biggest challenge. With most cinemas screening foreign films they are left to with no alternative in terms of screening their work,” Ingolo says.

He views the TV capacity as being limited leaving young talented and upcoming artists not exposed or giving them chances.

Ingolo attributes the future of film industry in Kenya to film players themselves.

“Film players need an enabling environment that can only be created by the Film commission of Kenya. Proper policy network on films ought to be created to
enable the building of this industry,” he adds.

Ingolo adds that entrepreneurs need to open up and invest in this industry.  “With the young and ambitious film makers available exposure is needed if we are to take this industry to greater heights and this can only be available by investing in them,” he adds.

Albert Wandago a Film Producer famed for a successful film “Naliaka is going” says the future of the industry is bright.   He says “With proper policy frame work in Kenya the film industry in Kenya will improve. He further adds that most people in the country do not understand the functions of the commission.

“Most Kenyans do not know what the film commission does or even if it exists,” he says. He however adds that the fact that if piracy laws are not implemented it really affects income from production.

“The few film makers in the country can not prosper because most buyers would prefer having the pirated copies. This he says kills the morale of film makers,” he adds. Wandago is of the opinion that Kenyan film viewers do not have an interest on detective programs.

He however adds that any venture in this direction is encouraged but a film maker will have to work extra hard.

Kenya’s potential is big and if proper structure is put in place in the next five years its film industry will make great strides.