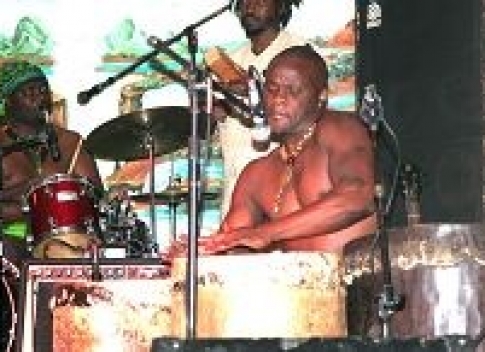 Ten o’clock on Saturday night at the Blue Nile in Minneapolis comes and goes.  Some of the band members of Jabali Afrika mill around like studs on a street corner–arms crossing their chests, hands tucked under their armpits.

It’s bitterly cold outdoors and only an odd dozen or so people have taken seats in the Nile’s lounge. Waiting for the show to start, I pick up a conversation with band member, Justo Asikoye who favors the bass guitar among the many instruments he plays.

He tells me the usual stuff about wanting to send out a message of positivity to the world via their music, but then I hear something new.  Whereas many African bands have remained in Africa or emigrated to Europe, Jabali Afrika chose to move to the United States, not to forsake their homeland, but to reach a bigger audience with an evangelical zest.

"We wanted a bigger view for our music; we wanted to reach a bigger spectrum.  To reach a lot of people, well, Africa has a lot of hardships, it’s a bigger risk to stay in Africa, so…" They relocated, pulling up roots from Kenya and Swaziland and setting themselves down on the east coast of the US. At age 37,  Justo now calls Baltimore his home.

The stage is set up with three sets of drums:  a quad of tall conga drums on the left side, another foursome of African drums that are smaller and arranged so that the player can sit down to use them, then standing at the back of the stage is the standard rock-n-roll snare drum set leaving me curious to hear this heavily percussive music.  In front of the elevated stage is a dance floor with an area of about 15 x 15 feet.

Jabali Afrika starts off their first set with a smooth, lyrical number harmonizing in Lingala.  Pauline Harris, an immigrant from Kenya is seated in the audience with me.  It’s to my great advantage to have met her this evening as she provides me with words and history about the Kenyan music that Jabali Afrika plays.

When I hear a thread of Jamaican Reggae running through the beat, I learn that the music is known as Benga, a musical genre of Kenyan popular music.  The touch of Reggae comes from the Cuban dance music that influenced Benga back in the 1940s.

The lengthy piece ends with an empty dance floor and the second number starts up.  This one is strong in its polyrhythmic sound.  I find it nearly irresistible and want to jump out on the floor to dance.  Oddly, no one else seems to have trouble resisting the urgent call to dance that the drums all sound.

After listening to the rich, percussive music, the third number begins with lead guitarist, Joe Laforte calling out, "…the people’s voice.  The government’s gotta respect the voice of the people.  That’s what it’s all about."  The voice inside of me says, "dance."

Pauline explains that traditional African dance affiliated with Lingala and Benga music involves the rotation of one’s hips.  "It’s sort of a half rotation with a sudden stop."  My hips won’t cooperate, but Pauline tells me that because I’m White I’m not expected to know how to dance African; I’ll be exempt from the expectation of proper, traditional dance.

Armed with her assurance, I hop up with the dance floor all to myself and try to focus on one set of drums to lead me as I bounce around the floor.  When the next song starts, it’s back to Benga with its mesmerizing guitar playing.  The floor finally fills in with dancers in every available space and stays that way for the next several hours.

Jabali Afrika plays right up until 2:00 in the morning.  The crowd, having swelled to nearly 150 people, has thinned by this late hour, but not by much.  Somehow the happy immigrants have influenced the rest of us with our Western step so that everyone is grooving and gyrating to Jabali Afrika’s authentic beat.

Visit the Photo Gallery for more pictures from Jabali Afrika’s concert in Minneapolis.