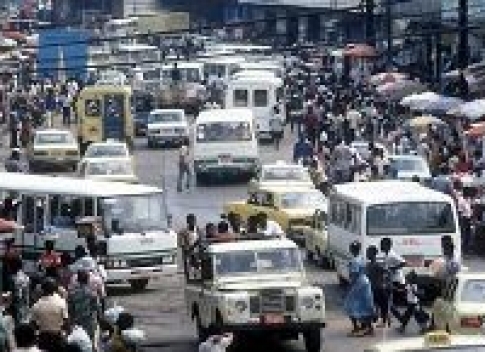 MONROVIA, Liberia – Ciata Victor gave up a high-paying tech job, a spacious condo and a first-world life in Maryland to return home to an African capital that barely has electricity or running water.

After 26 years of watching from afar as her native Liberia was ravaged by coups and war, Victor says she’s home to stay. And she’s started a business — running a seven-computer Internet cafe using a generator and a borrowed satellite hookup.

‘There’s some now who say they will not come to Liberia until Liberia gets running water and electricity. I just wanted peace,’ Victor said.

As this West African country works to rebuild, moneyed Liberians who spent decades abroad are starting to come home. It’s a trickle that the year-old government hopes will swell, supplying investment and a much-needed educated class in a nation where few went to school during 14 years of fighting and instability.

Now 45, Victor was 19 when she moved to the United States to attend college in 1980, the year Liberia’s government was overthrown in a coup. Nine years later, Charles Taylor launched a rebellion that threw the region into a conflict from which it only emerged with his ouster in 2003. Taylor has been charged with war crimes by neighboring Sierra Leone and is awaiting trial.

In 2005, a Harvard-educated former U.N. and World Bank official became the first female elected president in Africa. Many Liberians said the installation of Ellen Johnson Sirleaf heralded a new era for the country’s 3 million citizens — including those who hadn’t been back in years.

Most Liberians with means fled during the war. Liberia’s historically close ties to the United States — it was created in 1847 to resettle freed slaves — meant many ended up in U.S. cities.

Sirleaf started calling on Liberian expatriates to come home during her election campaign and many returned to take posts in the government. But Liberia’s biggest sign of hope may be entrepreneurs like Victor who start businesses with their own money.

There is already foreign investment in Liberia — Firestone operates a rubber plantation, Mittal Steel is redeveloping iron ore mines and foreign governments have promised aid. And the U.N. has brought in 15,000 peacekeepers and other expatriate workers.

Henrique Caine, who is trying to start a construction equipment rental company in Monrovia, said the foreign presence was part of what spurred him to return.

‘I look on the news and I see a lot of white folks from Europe and America in Liberia and I say `Well, it can’t be that bad. So it’s time for us to start going home,’ ‘ he said.

Caine keeps a house in the Baltimore area where his wife and children live, but he travels to Liberia every few months. On this trip, he was trying to get a container of jackhammers, concrete mixers and other supplies past customs.

He says it’s gotten easier to do business, but he still has had to pay some bribes at Monrovia’s port. And he’s had difficulty getting U.S. investors for a company in a country so recently known for child soldiers and no-go zones.

Victor says her Internet cafe has yet to turn a profit after six months. Running the generator eats up most of what she makes from e-mail surfers and people who use their laptops in her wireless lounge. She’s funding the enterprise with savings and ad sales from a website that she runs for the Liberian diaspora. Her relatives in the United States call her crazy for moving back so soon.

Victor describes the Monrovia she once knew as a place where children were more familiar with books than guns. She said it was hard to come back and find buildings gone and people missing. Most former classmates are still overseas.

But the pioneers share a heady optimism that may be just what a devastated Liberia needs.

Barkue Tubman, who did marketing for singers like Missy Elliott and Norah Jones in New York before she moved back, says her ultimate goal is to bring a performing arts center to Monrovia and to get cultural life going again.

Caine says he’s risking everything on his venture — he even cashed out his 401(k) retirement plan.

Many of those who stayed, or couldn’t leave, are more cautious. Just outside Monrovia, aid workers in the village of Quenyodee say they’ve had to cajole residents to rebuild houses. Men who had rebels tear down their homes again and again have been reluctant to trust the peace.

T-Max Jlateh, a Monrovia radio talk show host, said some of those who stayed resent the ease with which those who left can return, but he added that Liberia is thankful for whatever help it can get.

‘Some of them have quite a lot of expertise that this country really needs now coming back from war,’ Jlateh said.

A typical newcomer, he said, is easily distinguishable by his American accent, hip-hop clothing — and his walk.

‘He walks as if he was walking on ice,’ said Jlateh, “Floating up and down. . . . But it’s just an act. After five or six months, it wears off and you’re just a Liberian just like anybody else.’