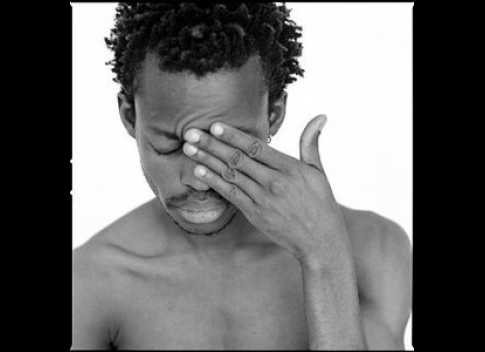 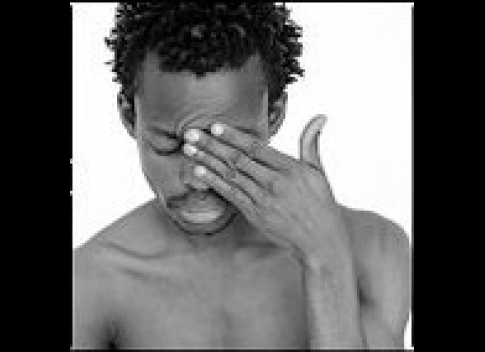 Along with over 200 other people crowded into the Walker Art Center performance hall, for over 30 minutes on May 17th,  I watched dancer Faustin Linyekula’s mind unfold as he contorted and splayed his body before us, giving physical form and movement to his thoughts on art and immigration.

As patrons walked into the gallery, they discovered the dancer seemingly fussing over last minute adjustments prior to his performance.  But as Linyekula continued to shuffle through his collection of books, projecting visuals of individual pages onto the opposite wall, it became apparent that his haphazard shots, his scanning of random pages and the various degrees of focus were an integral part of his presentation.

The French word, "veille," hovered at the top of the projection and taking note of this command, I obediently began to watch intently.  Most of the crowd, however, remained unaware of the fact that Linyekula had begun his performance.  Many continued to loudly chatter and shift about looking for an open seat or accommodating wall against which they might lean.

On the wall, the words from V.Y. Mudimbe’s book, The Idea of Africa, came into focus.  "…art in dark rooms…small wonder most of art is unseen."  At this, Linyekula walked out into his self-defined performance area and waited with a dispassionate look on his face.  It took several minutes for the audience to quiet and redirect their attention on Linyekula.

Then, exuberantly, this gaunt, young man proclaimed that there were parades today in his homeland of Congo, celebrating his son’s birthday.  With a smirk, he backed down from this boisterous position and conceded that the parades might have something to do with the celebrations commemorating the rise to power of Laurent Kabila in 1997 during which Zaire was renamed to its present name, The Democratic Republic of Congo, on May 17th.

After a brief and jovial exchange, the whine broadcasting over the public address system grew and Linyekula moved into a space designated by a wide, long sheet littered with art books.  A pair of statues stood on each end of the cloth, on opposing sides.  The whine interspersed with sometimes understandable radio announcements.  The noise sounded both distracting and drawing.

Our eyes watched as Linyekula picked up white chalk and wrote numbers–dates on his body.  "051707" was rapidly, yet carefully drawn on his right shin.  Then he filled his left calf and his forearm and his left shin.  He peeled his long-sleeved, black shirt off, scrawling on his back and writing decisively on his muscled stomach.  All the while, he crawled and rolled and crab-walked around the length of the runner on the floor.
The dozens of muscles on his back were as defined as if he wore no skin.  His painted face appeared like an African warrior or could it be the West African marks of courtship?  It was all so subjective, the meaning truly dependent on the owner of the eyes who were watching him.

That is the nature of modern dance.  Unlike ballet where the dancer seeks to depict a swan gliding over the pond, or a fish swimming in the sea, with modern dance, as with modern art, the meaning is interdependent between the performer and the viewer.

Further, the perception of an individual performance is informed by the angle from which the viewer observes the show.  Those seated at the edge of the audience, closest to Linyekula felt the heat of his body and smell the perspiration glistening on skin.  Those seated at the top of the auditorium looked upon the act with a broader perspective, seeing not only the dancer, but the entire stage as well as the reactions of audience members up front.

Linyekula has looked to philosopher V.Y. Mudimbe for much of his inspiration.  He toiled to tell his story using the everyday experiences he encountered.  Very much an organic artist, Linyekula’s story focused on the immigrant experience.  Many in the audience were also immigrants.

Linyekula stood on his head.  On the hard, linoleum floor, he slowly hoisted his inverted body up until his toes were pointed at the ceiling.  He roared out, "I am an African dancer" several times.  Then, having lowered his body back down, he said, with irony, "Hope…hope…he who lives on hope starves."  Yet he continued to point at photos projected onto the wall and repeated "hope, innocence, dreams" over and over, the photos showing families and individuals.

By this time the chalk has been almost entirely sweated off his body.  He brought closure to his piece singing in Lingala, echoing the prerecorded voice that was still playing over the speakers.  Then he melted into the audience and sat next to another patron, accepting her offer of water.  Faintly we heard the last notes of the song.

Linyekula’s brief spring performance at the Walker Art Center previewed his lengthier artist-in-residence stay that will take place this coming fall during the first several days of November, 2007.