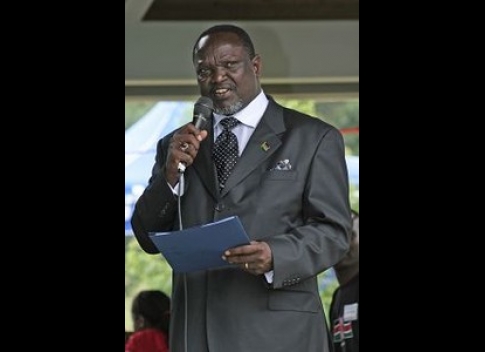 Kenya’s Ambassador to the United States, H.E. Peter Ogego, over the weekend, met with Kenyans in Minnesota and surrounding states to celebrate Kenya’s 44th Madaraka Day.

Ambassador Ogego read excerpts of President Kibaki’s Madaraka Day speech which outlined the milestones the country had achieved and a call to Kenyans to renew their commitment towards building a free, just and prosperous nation. He emphasized the importance of individual and collective actions and the need to focus on strengthening their unity and sense of nationhood.

Ogego stated that Kenya was going through a transformation on all levels and called for the cessation of unnecessary levels of engagement. He emphasized his commitment to serving the Kenyan Diaspora and offered that embassy staff was always available to help. He spoke on personal responsibility saying that “we must all know why we came here”.

Speaking on the rising insecurity in different areas of Kenya and the Mungiki menace (an illegal cult that continues to murder civilians) in Kenya, Ambassador Ogego said, “Their days are numbered. Those who think they can get away with killing others are mistaken. Kenyans are not cowards, we were not scared of the colonialists and political oppression of the past. We will catch these misguided criminals who have failed in life”.

On the last Madaraka day of his current term, the president had highlighted some of the achievements over the last four years. The economy grew by 6.1% for the fourth year in a row and the number of Kenyans living below the poverty line was cut from 56% to 46%. The government had also implemented rural electrification schemes with 377 grid extensions completed and a further 340 scheduled for completion by September this year.

President Kibaki also urged leaders to nurture national cohesion citing tribalism as a dangerous ill that could tear the Kenyan people apart. He was encouraged by the youth of Kenya who have largely disregarded tribalism and said there was hope that the vice could be eliminated from the society.

Madaraka Day,  June 1st, is the day that Kenya attained internal self-rule in 1963, preceding full independence which was achieved on 12th December 1963. Madaraka Day was the first time the Kenyan flag was raised and the national anthem recited leading to it being declared the first national holiday by the new government of Kenya.

Official Madaraka Day celebrations in the US are traditionally hosted by the Kenyan embassy in Washington DC, however, the ambassador committed to having it in Minnesota for the first time this year. It is observed as a day for families to get together to renew bonds and strengthen their national identity. He said at the end the huge turnout vindicated his decision to have the celebration come to Minnesota this year.

The event, organized by a local Madaraka day committee, included food and refreshments, music, a play area for the children, a HIV/Hepatitis C testing tent and several vendor stalls, with embassy officials on hand to renew passports. Over 150 passports were renewed at the end of the day.

Thirteen-year old Mary Page sang Shackles, a song by the group Mary-Mary which was followed by a prayer and the Kenyan national anthem.

Ogego praised the efforts of a group of Kenyan-American professors who pioneered efforts to donate books from educational institutions in the US. Dr. Jane Njue from Northern Illinois University got together with, Dr. Agnes Odinga of Hamline University, Dr. Ebby Luvaga and Dr. Leah Keino, Iowa State University along with Dorothy Rombo a graduate student from the University of Minnesota to donate books to Kenyatta University in Nairobi. Partnering with Books for Africa, they went to their colleagues at various institutions and requested for used books, collecting 40,000 university books.

Morande ended by thanking the main event sponsor, the Minnesota Department of Health (MDH). He praised MDH for taking the initiative to engage the Kenyan community as it confronts the AIDS and Hepatitis C issue among its members.

Morande who got tested for both HIV and Hepatitis C at the African Health Action Corporation tent urged awareness and testing.

“It is important that everybody gets tested at least once a year and those at high risk, like health workers, should be tested every six months. HIV is a disease like any other…the earlier you start your treatment the better,” said Morande.  Over twenty people were tested that day.

Attendees were impressed by the large turn out, despite the rainy weather towards the end.

“We wanted to give Kenyans the opportunity to get together to enhance self awareness in the Diaspora,” said William Yimbo, one of the community leaders who helped organize the event.

“The large number is a show of patriotism to our country. We can work together as a community, showing harmony and serving as examples to our children,” Morande said.

“It has been a lot of fun,” said Immaculate Oburu, a University of Minnesota student, after the event. “I was really surprised at the diversity in age, everyone from the children to the older people came.”

“We are very pleased by the work of our leaders here in Minnesota, Madaraka meant that we were self sufficient and free but not all those have been achieved,” said Chris Obure who attended the event.

The event was deemed a success with several hundred Kenyans showing up, as well as representatives from N. Dakota, S. Dakota, Iowa and Wisconsin. There was an evening dance held later that night at the Blue Nile hosted by Kilimanjaro Entertainment.