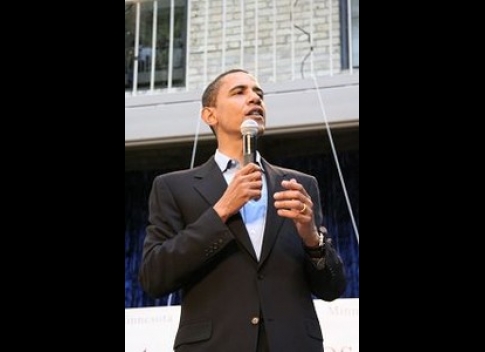 Democratic presidential candidate Barack Obama held a fundraising drive in Minneapolis on Friday June 29th at the International Market Square. Obama, the son of a Kenyan father and an American mother, was in town in an effort to raise money before the second quarter deadline of June 30th.

The junior Senator from Illinois, who is a former grassroots organizer and civil rights lawyer, has inspired a feverish grassroots campaign with his message of hope and his mantra calling for ‘a new kind of politics’.

About 3,000 people showed up with the crowd decidedly young, a characteristic of the demographic Obama appeals heaviest to. Entrance to the event cost $15-$25 as part of a campaign strategy to focus on small donors, emphasizing number of donors over amount donated.

“The young crowd shows that people want change,” said Isaac Oyaro a foreign student at Metropolitan State University who had brought his father visiting from Kenya to see Obama.

Susan Patton, a graduate student at St. Cloud State University said, “Obama is a great speaker and I’ve wanted to see one of his speeches for a while and find out more about him.”

By the afternoon of the Minneapolis fundraising, the Obama campaign announced that they had surpassed their goal of 250,000 donors to the campaign for the first two quarters. In an email message to supporters, campaign manager David Plouffe urged them to be part of ‘something historic’ by helping the campaign reach its target of 350,000 donations by the deadline. The campaign has tried to downplay expectations that it will beat the first quarter total of $25 million by a large margin.

Obama was introduced by Rep. Keith Ellison and Minneapolis mayor R.T. Rybak, who were the first mayor and congressman to endorse Obama.

Keith Ellison, the first Muslim elected to the US Congress, riled up the crowd with chants of ‘Obama’ and got loud cheers when he said, “Elections matter, leadership matters and right now we’ve got leadership in Barrack Obama.”

Mayor Rybak, who was excited by the crowd said, “This has been a people powered campaign from the start.”

Speaking on the turnout that saw people fill the square, pour over the hallways and lean over balconies on higher floors, Obama said, “Everywhere we go we have been seeing these great crowds.” He added, “It’s tempting to think it’s all about me,…but when I’m honest with myself I have to admit that’s not the reason people are coming out. The reason people are coming out is because all around the country people are ready for change. People want to see a different America."

Justin Simmons, a student from Jackson Mississippi doing research at the University of Minnesota on why he attended the rally said “I wanted to get a chance to find out more about Senator Obama. He has a lot of good ideas and I wanted to know more about his ideas on policy”

Yvette Davis an attendee who is yet undecided expressed admiration for the Senator as a role model for everyone and particularly men of color. “I wanted to hear more about his stance on issues like education, the war and poverty,” she said. “The country is so split maybe he can heal the divide.”

In his speech, the Senator highlighted the need to fix an education system that ‘left millions of children unable to compete’ and a health care system that is broke promising to have universal health care by the end of his first term. He talked about how the need for oil meant that America gave hostile countries millions of dollars and proposed an increase in fuel efficiency that would replace the equivalent of oil from the Persian Gulf.

On the environment, Obama conceded that reduced pollution might impose a heavier cost on businesses but said, “We can create a generation of businesses that will drive the economy for years to come”.

Obama got the loudest cheer when he spoke against ‘a war that should have never been authorized’. He vowed that as president, he would oversee a phased redeployment that would have all the troops out of Iraq by March 31st 2008.

“There was a moment after 9/11 where all of us understood the bonds we held as Americans,” he said. “Our politics has become selfish again”.

Obama resounded on his central theme of hope saying we have mutual responsibilities toward each other. He joked about people in Washington D.C. calling him a ‘hope monger’ but stated America has ‘been in tougher times before and each time we come out stronger and more prosperous’.

Ikram Mohamed and Fadumo Mohamud two high school students who volunteered for the event said they were inspired to do what they could to help support him as a black candidate.  “I feel he represents us,” said Ikram. “Maybe he could help our home Somalia once he becomes president”.

“I support him because I think he is intelligent and that he believes sincere politics is the way to go,” said Walles Agoye, a clinical nurse at Regions Hospital who also volunteered for the event. “As an African he gives everybody hope that you can achieve anything you set your mind to…even the highest office in the land.”

“I watched him in 2004 and he blew me away,” said Amos Samoite a supply manager at a nursing home and an ardent Obama fan. “He will have an impact [in the election] because most of his supporters are between the ages of 18 and 25; if they turn out he will win.”