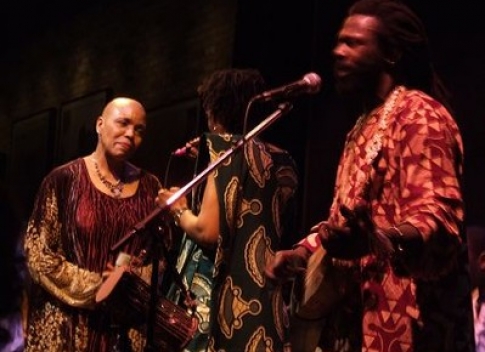 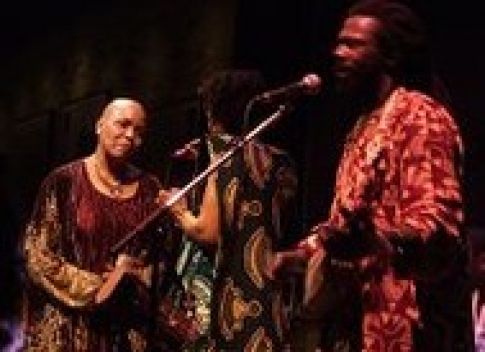 Pickett reminded the audience of 135 people how Bridgewater had garnered two Grammy awards and a Tony from her work on Broadway and was honored by France with the Commandeur de L’Ordre des Artes et des Lettres.

“Dee Dee Bridgewater has put together a project that blends the music and rhythms of West African traditional music and pop with American jazz and blues,” Pickett said. “But anything I might say doesn’t scratch the surface of the experience you’ll have tonight…The music that’s going to take place on this stage in a few minutes is just incandescent.”

I wasn’t disappointed with Memphis-born Bridgewater and her entourage of ten musicians, seven of them direct from Mali in West Africa.  Her current tour, “Red Earth: A Malian Journey,” delivered all that Pickett promised.

It’s not that Bridgewater wasn’t dynamic, pouring her heart and bountiful talents into the show, and it’s not that the musicians didn’t display a masterful sound, so in keeping with the polyrhythmic African music to which I am accustomed. And it’s not that the selections didn’t provide an energetic hybrid of African and American sound, but the show did not eclipse my expectations nor my previous experiences in African music.

That I was not sitting in my seat at the Dakota on October 13th with quite the same agog look of admiration as Pickett’s says, to me, a couple of things. First, I wonder how often Pickett has patronized the Cedar Cultural Center just down the road and around the corner, a music venue that’s rich in world music, especially African music. One of my favorite shows at the Cedar from this past year was Cape Verdean Lura whose show was matchless, who could, without hesitation, compare to Bridgewater’s performance.

And secondly, because a music connoisseur such as Pickett was so profoundly impressed with Bridgewater’s musical offering, practically telling us that hers was a unique performance to the United States, it would seem that Bridgewater is succeeding in a grand way. Her objective in her latest tour is to “spread Malian music.” With her fame and celebrity clout, she’s able to immerse a segment of society whose familiarity with music may not be quite as hip to a world music format as the lesser-paid and paying crowd at the Cedar where African music is expected and frequent.

Tuesday evening, the 9:30 show went on stage an hour late. With food and drink circulating on the floor, this didn’t pose a problem for most people. When the Bridgewater troupe takes stage, we discover that Dee Dee is a griot in her own right. She loves to tell a good story. With her beautiful hair shaved off, the focus becomes even less visual and more centered on her music and her message.

On the slightly elevated platform, eight performers squeeze into the space along with a baby grand piano, snare-drum set, several congo drums, a chair for the kora player and room for the band’s squeeze-drum player, xylophone and string bass players, and the star performer, singer Bridgewater.

She coaxes the audience, “If the music moves you, get up.  Do not be afraid; let the music speak to you.”
They then launch into an Afro-blues number, starting off with the wild, yet intentional drumming of Baba Sissoko on the talking drum.

Their third number begins with a kora solo played by Habib ‘Dia’ Sangaré. The kora is Africa’s gift to string instruments. Amongst all the drumming that denotes African music, there is the enchanting kora. It seems impossible to play so beautifully. Imagine weaving a complicated tapestry with a handful of threads and a pair of needles, and yet, magically, the artwork spins out. That’s how it is when Sangaré plays his kora. He plucks steel strings stretched between two bracing sticks, resonating in a large, hollow gourd and out pours the sounds of bliss.

Bridgewater playfully demands audience participation with the fourth number. We now all know the words to say to a loved one, having repeated over and over the phase Djarabi (Oh my love). This song, sung in duet with Mamani Kéita, showcases an irresistible blend of both Malian and American cultures. The two women, Bridgewater and Kéita, complement one another. Bridgewater slips back and forth between musical continents seamlessly. She shines like gossamer when she’s closer to her American roots. And she gives us a gorgeous bridge between countries with her powerful vocals and sweeping dance moves.