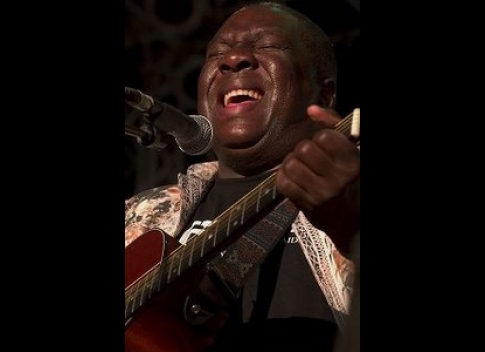 Vusi Mahlasela was only eleven years old when he was caught up in the horror of the June 16, 1976 Soweto Uprising, aptly also called Soweto Massacre, in South Africa.  It was that transforming event that weighed heavy on his heart and soul and every day since then as he’s struggled with apartheid.

And though those incidents are history, the affects still fashion Mahlasela’s music.
“I used music to give more hope to people,” Mahlasela says in a phone interview. “I felt I was able to bring courage to others and also, comfort.”

Born in 1965, Mahlasela grew up listening to music and trying to recreate what the music said to him.

“Where I come from (Lady Selborne, South Africa) there was quite a lot of music, especially at home,” Mahlasela recalls. “My grandmother owned a shebeen, (a pub that sells liquor without a license). I made my first guitar out of a cooking oil container and fishing line.”

Little did he know that decades later he would become a world-renowned guitarist and musician – one many critics have called the “Bob Dylan of South Africa.”
And on April 27, The Cedar Cultural Center in Minneapolis will give music lovers a chance to see Mahlasela perform live.  Mahlasela impressed Bill Kubeczko, the artistic director of The Cedar who traveled to New York City in January to take in dozens of artists’ show cases at trade show.

This will be the first time that Mahlasela will perform at The Cedar and first-time shows do not often attract larger turnouts.

But “that’s not a factor for us because this is our mission,” Rob Simonds, executive director of The Cedar says.

The mission, according to The Cedar’s Web site is to “promote(s) inter-cultural appreciation and understanding through the presentation of global music and dance.”

However, Simonds continues, their mission has become harder to accomplish in recent years because, politically, it’s become more arduous for international artists to tour the United States.

Simonds outlines several obstacles that hinder international exchange of artists and musicians.  First, he points out, visas present a challenge.

“They are much more expensive and harder to obtain because the State Department denies them visas more frequently and the application process is more vigorous,” says Simonds. “Every artist must be interviewed for his or her visa application.  It didn’t use to be that way—mail it in (the application) and receive it (the visa).”

Musicians also face political pressure from both family and compatriots not to tour the States in part because of the unfavorable image that the U.S. projects to the rest of the world, Simonds says. The weaker dollar presents another complication.

Despite these obstacles, world musicians still seek out United States tours and we’ll not have to wait long to see how Mahlasela lives up to his  Bob Dylan moniker.