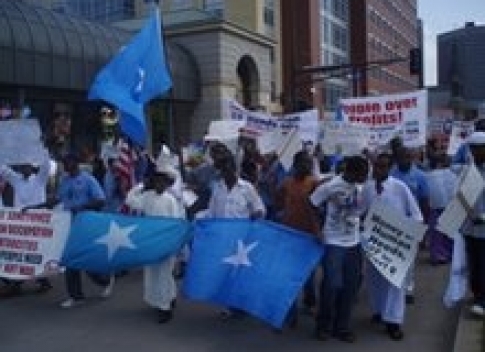 St. Paul, MN-Freedom of expression and the power to summon your government, the two
most important principles of democracy played out at the Republican
National Convention (RNC) in St Paul,
Minnesota. Among an estimated 15,000 protesters that took to the
streets of downtown St Paul on Monday, September 1 was about 300 Somalis who
were protesting against “the U.S. sanctioned Ethiopian occupation of
Somalia.”

Many of them are American citizens and are recent immigrants who don’t
speak English fluently. Regardless, they seemed to know and want to
practice their rights under the constitution of the United State of
America.

Carrying the American flag along with the Somali flag, Somalis chanted and marched all through the marked route for the RNC
rally. Other Americans joined the Somali contingent to show solidarity
and understanding, more importantly to encourage them to participate
in democracy. Scott Peterson of Columbus, Ohio who drove miles to
participate the rally said “this is the real democracy … Somalis
understood it well”.

Later, as Somali protesters reached close to
the Xcel Center, the convention site, a counterdemonstrator
sarcastically said “thanks for exercising your First Amendment rights.
I fought for them”. In response, one of coalition marshals started
chanting in “tell me what democracy looks like, this is what democracy
looks like”.

Gandi Mohamed, Somali-American veteran also responded by
saying “we demand peace, justice and equality for all.”

Somali Cause, an umbrella organization for eight North American
political organizations headquartered in Washington, DC, was among the
organizing groups. Ethiopia
out of Somalia, U.S. stop supporting warlords & dictators read some of the signs and flags that the demonstrators carried. A huge banner with the Somali Cause
logo had a statement that read: End the U.S. sanctioned Ethiopian
occupation and atrocities, Somali people need peace, not war.

Speaking to the thousands of protesters, Mohamed Hassan, Somali Cause
vice chair and member of the organizing coalition, told the crowd that
“first U.S. government signed contracts with the warlords for
intelligence or to kill individuals that are either identified by the
warlords as enemies of the U.S. or U.S. has some intelligence on them …
later when Somalis revolted against the warlords and dispelled them
from the country, U.S. has asked Ethiopia to reinstate them by force”.

Hassan then asked protesters to contact their elected officials to demand an end to
the Ethiopian occupation.

The protest and the call to Minnesotan legislators to engage in Somali domestic and international affairs could not have come at a better time. Political candidates such as Senator Norm Coleman, Representative Keith Ellison, and others are seeking the votes of the Somali community here in Minnesota. Somalis are credited in electing to the
U.S. Congress the first Muslim American, Rep. Ellison of
Minnesota. Additionally, Somalis in Minnesota were the first to question and challenge
their government, the U.S. government, about its involvement in their
native country by organizing huge demonstrations and forums last
winter.