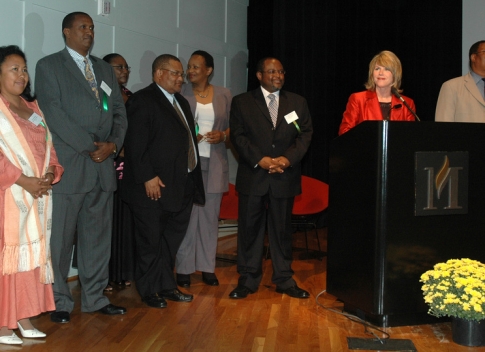 St. Paul, Minn— On September 12th the Minnesota and African communities did more than reconnect at The Minnesota History Center for the Books for Africa 20th Anniversary Gala. They celebrated their connection and renewed their pledge to support each other in the noble cause to end Africa’s book famine. In a jam packed auditorium, attendees wearing brightly colored and beautifully patterned African outfits keenly listened as representatives from Africa and local leaders praised and encouraged the organization for its work.

“I never imagined that I would have to speak to so many people today!” exclaimed Welile Nhlapo, South African ambassador to the U.S. “Let me thank you first for the invitation to be a guest at this gathering this evening, but let me also thank you for your efforts directed to us. We are all invested in the best kind of investment: our children and our future,” he added.

Books for Africa was founded by Tom Warth in 1988. He went to Uganda seeking an adventure and came upon a library with few, tattered and outdated books. This inspired him to create a system for collecting discarded books from American schools, libraries and publishers to send to Africa. 20 years later Books for Africa has sent over 20 million books to the 38 countries in the continent.

In a recorded message, former UN secretary general Koffi Annan stressed on the importance of Tom’s work, “Books for Africa is a simple idea, but its impact is transformative. For us, I have said before, literacy is quite simply the bridge from misery to hope. Literacy provides the keys to learning and empowers the individuals to expand their choices and opportunities for the future.”  Koffi Annan serves as an honorary co-chair of Jack Mason Law and Democracy Initiative, alongside former U.S vice-president Walter Mondale. Jack Mason was a federal judge who sat on the board of Books for Africa. The initiative, which was launched this year, will send legal literature such as law teaching books, legal treatises to African law schools, universities, bar associations and civic organizations.

Much as Books for Africa is aimed at contributing to the knowledge base for the African youth in particular and the African population in general it has also created a path to improving America’s bi-lateral relationships. “Internationally, our country is struggling to regain a lot of the high ground, the respect, the feeling of awe when you would say you’re from the United States,” noted Congresswoman Betty McCollum. “The gift that you give a village, the gift that you give a child, from here, person to person, is so important not only in the making of a difference of a more globalized and peaceful world but just in our nation-to-nation relationships,” she added.

McCollum’s notion of improved nation-to-nation relations was reinforced at the Books for Africa breakfast the next morning when Ombeni Sefue, the Tanzanian ambassador to the U.S reminisced being taught by Peace Corps volunteers. “I have a lot of support for [the Peace Corps]. I had two Peace Corps [volunteers] in grade 3 through 6 and two Peace Corps [volunteers], a couple, in high school, grades 9 through 11. I actually have managed to track one of them in Los Angeles. I’m still looking for the other two,” he said.

At the gala Tom Warth was the star of the night and focus of much praise, but when he took to the stage he humbly forwarded the compliments to the people who have used Books for Africa as the route to send books to their high school libraries and city libraries they have visited. Without underscoring the work of his organization, he reminded everyone that much still remains to be done. “We’ve sent 20 million books to a continent that, as I understand it, has 370 million children. We have to do more. While we sit here eating our fancy meal and celebrating—which is fine, you know, it’s our way—there are children without books. It’s a celebration, but we need to end the African book famine. Twenty million books is not enough to do it.”