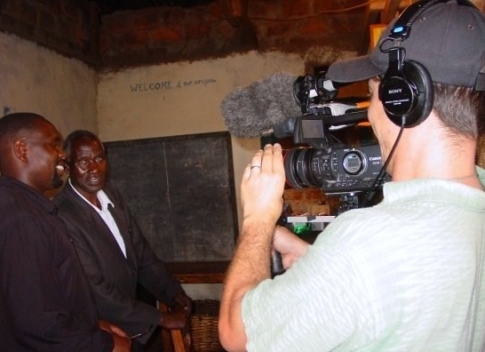 Senator Barack Obama is seen as transnational figure, one who transcends tribal and national politics, former Mshale Chief Editor, Edwin Okong’o found on a recent trip to his country of birth, and the home of Sen. Obama’s father, Barack Obama Sr.

“Okong’o was speaking at “The Obama Effect”, which was a three day conference organized by the University of Minnesota’s school of journalism ; a dialog on issues and events that have surrounded Obama’s campaign. He jumped on an invitation by Catherine Squires, one of the organizers of the event, to “discuss how Obama had awoken the African vote and participation in international politics.”

His presentation was timely as Okong’o had just returned from a 10-day trip to Kenya where he was covering the effects of the Obama candidacy for Frontline. Okong’o’s reports on this visit to Kenya span a myriad of issues: religion, Kenyan media, Obama’s family and politics and an assessment of middle class versus low income view on Obama’s race to the United States White House.

In a piece on Frontline in October, Okong’o showed that in Kenya religion had little to do with who ran for office. His interviews with Sen Obama’s family showed that his relatives had different faiths: Islam, Christianity and Traditionalists. Okong’o was contrasting the discussion on religion in the US, and the connotation that Islam was a bad religion.

Responding to a question from the audience on the war on terror and its effect on Kenyan politics, Okong’o said: “Kenyan Muslims have been the most affected in Kenya on America’s War on Terror. This group looks forward to a new foreign policy that will end the war on Iraq.” He added that many Muslims in Kenya had been arrested and held by both the Kenyan and American government as they were “investigated” as terror suspects.

Foreign policy is an issue only understood by Kenya’s middle-class, Muslim or not; there is a distinct expectation from another group. With little or no access to the internet and newspapers, Okong’o argues that many poor rural Kenyans expect economic reprieve if Senator Obama is elected.

“To me it is an economic perception. If you can read newspapers and have access to the internet, then you know how these things [politics] work.” He laments the limited access to information: “There are no small town newspapers”. He argues that it is the idea that the American son of a Kenyan man is running for the highest office in the US that appeals to many of his international supporters.

Okong’o, however, has criticized Kenyan’s embrace of Obama: “Obama Sr. was never a part of Obama’s life, but now that Obama is successful like a true dead-beat dad, we are claiming him as one of our own.”

There is a positive aspect to the celebration of Obama: “We need to critique ourselves, there is something wrong with our political system when we have to look up to a foreigner for redemption.” Okong’o is hopeful that African leaders in general will be forced into transparency by a potential Obama presidency, however, he does not expect this change to happen overnight.

There is another upside to Obama’s popularity; “”Obama is the fastest growing industry in Kenya,” Okong’o quotes Obama’s uncle Said Obama. From merchandise to Obama tours, Kenyans have taken advantage of the Obama excitement.

“The most despicable thing I saw was Kenyan journalists who know very well that Western journalists are looking for dirt on Obama, and are feeding them lies in an attempt to make money.”

In the US, Okong’o is delighted that African immigrants are involved in politics. “Potentially what Obama has done is make naturalized citizens more interested in engaging in local American politics. Those who cannot vote are donating their time and money.”

Watch Okongo’s video on his trip to Kenya here.