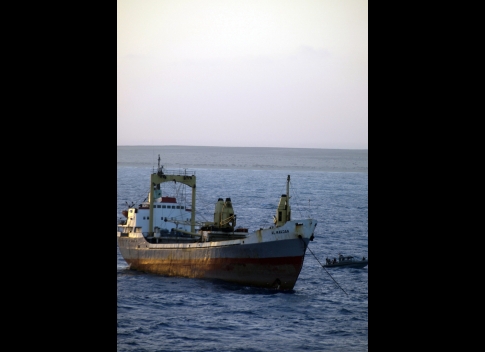 The MV Biscaglia was transporting palm oil when it was captured Nov. 28 off the coast of Somalia, where heavily armed bandits have commandeered nearly a 100 ships this year and are currently holding them for ransom.

Three security guards – all former British soldiers – jumped into the sea after futile attempts to prevent the pirates from taking control of the vessel. They were later rescued by a German naval helicopter and taken to a nearby French frigate, said Nick Davis, director of the London-based Anti-Piracy Maritime Security Solutions (APMSS) that hired the unarmed guards.

In a news release issued last week, Davis said: “APMSS security team came under heavy attack from pirates, but were able to mount sustained, non-lethal, resistance, denying the attacker’s access to the ship long enough for the ship’s operating crew to seek safety below decks and to summon assistance from coalition warships.”

“I have spoken with my team leader on the phone and he informs me that the level of violence was unprecedented and forced them to reluctantly leave the vessel after every effort was made to ensure the safety of the ship’s crew,” said Davis.

He said the three guards are well with no reported injuries, but there are still 25 Indian and two Bangladeshi crew members on board the Biscaglia, which is believed to be headed to anchorage in Puntland, Somalia.

Pirates have become increasingly daring in the in the narrow shipping corridor between Somalia and Yemen, a major international shipping lane through which about 20,000 oil tankers, freighters and merchant vessels pass each year.

Another Liberian-flagged ship was hijacked earlier this month in the most high-profile hijacking so far, when Somalia-based pirates seized the MT Sirius Star, some 518 miles south-east of Mombassa, Kenya. The Saudi oil super tanker, carrying $100 million worth of crude oil, is the largest vessel to be hijacked to date. Pirates are still holding 25 crew members.

“Although this is just the latest of a large spike in attacks off the east coast of Africa, this incident is significant on two counts,” said Pottengal Mukudan, director of the International Maritime Bureau. “ Firstly, this is the largest vessel to have been hijacked. Secondly, the distance from the shore would suggest a highly organized operation – this is not mere opportunism.”

In response to the worsening situation, several countries have dispatched warships to the Gulf. Germany and France have ships in the area as part of a NATO armada which, along with Denmark, India, Malaysia, Russia and the U.S. navies, have started patrolling the vast waterway in the Indian Ocean.

Liberia generates $13 million annually from its ship registry program – the second largest in the world – which includes nearly 2, 800 ships, 10 percent of the world’s ocean going fleet. According to the U.S. Maritime Administration, Liberian flagged vessels transport more than one-third of the oil imported into the United States.