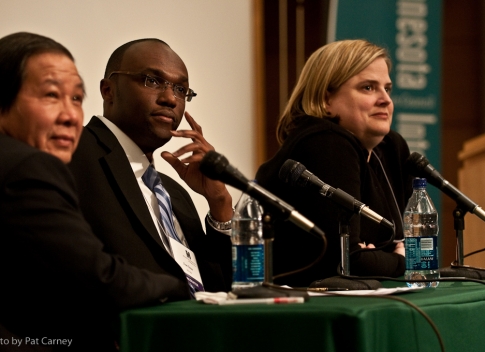 In February of 2007 newsworthy stories included the decision by North Korea to dismantle its nuclear facilities, devastating floods in Indonesia that killed over 80 people and displaced over half a million others, and Intergovernmental Panel on Climate Change (IPCC) released a study on global warming. However, something else eclipsed the headlines of many newspapers instead of the globally impacting events: the death of American celebrity Anna Nicole Smith.

Alisa Miller, CEO of Public Radio International (PRI) told a small, but avid audience assembled at Cowles Auditorium in the Humphrey Institute of Public Affairs highlighted these concerns during a power point presentation as she partook in a panel discussion on the future of global journalism.

Despite a nasty snowstorm Tuesday evening, December 16th , Miller, along with Tom Gitaa, founder and president of Mshale newspaper, and Nghi Huyhn, CEO and originator of Asian Business & Community Publishing, Inc informed their audience of the nature and direction of world news coverage and engaged an educated gathering in discussion.

Presented by Minnesota International Center (MIC), whose mission, simply stated, is to fire up community awareness and understanding on issues of global and cultural scope, their two-hour forum focused on bringing international news to our front door.

In advocating his newspaper Mshale, a Minnesota-based one that covers African immigrants in the US, as a viable alternative to St. Paul and Minneapolis’ larger publications, Gitaa suggested that “Whereas the mainstream media prefers to cover the exotic of the international community, Mshale can talk about the real struggles that our people are going through.”

“I think part of why the broader media is only covering the exotic is a lack of understanding of the continent (Africa) itself,” said Miller.

She takes this lack of understanding as a reason for inadequate world news coverage even further and proposes that “Social entrepreneurship is a major focus. If a news organization doesn’t have that or doesn’t value that, they won’t be covering the bigger part of African life.”

Huyhn described his paper, Asian American Press, typical of many free newspapers, as dependent on advertising. “Our revenue is 95% advertising. We are run like a business,” said Huyhn. Yet their paper’s focus remains on the dissemination of cultural information.

“We try to provide a bridge of understanding between the Asian community and others. Japanese, Chinese, Korean, Cambodian, Laos, Hmong, and Tibetan comprise some of our community,” he described. “The focus of the paper is to try to promote our business and offer the public events and information about our culture.”

Despite the fact that these media are businesses, they also serve their communities. Gitaa said, “As a community paper, local news must be covered, struggles must be highlighted.”

Gitaa has found that diversification in advertising revenue is crucial. “Part of the mission of the paper is to be the voice of the community. Some times we’ve had to let an advertiser go because they aren’t aligned with our mission,” admitted Gitaa.

Likewise, PRI, which relies on a much smaller percentage of advertising dollars to fund their organization, takes a similar attitude as Gitaa. “If an advertiser is unhappy with the kind of coverage that we provide, they can leave,” proclaimed Miller.

Understandably, Huyhn summed up the perspective of these alternative broadcasters of global journalism. “It’s not about money,” he said. “(Our) mission is to build greater understanding.”

Miller maintained that, “It is really about service regardless if you’re working for a profit or non-profit.”

The impact of a single, individual journalist, said Miller, has never been greater.

Michael Norman, owner at Workplace Skills, LLC, raised his concerns, “I personally believe that fewer and fewer journalists have a good understanding of what is going on in the world. How do journalists learn about the world in order to talk about it?” asked Norman.

Miller responded. “People end up in such tight beats that are so constricted they don’t have a chance to develop depth,” she said. “When I was in journalism school, I took classes across the board to further my understanding of world events. Now the world is more complex and new journalism students have to learn more about more,” she observed.

Miller wryly concluded, “The biggest challenge now for PRI is to have enough information to get listed (on the Web) as frequently as a pop culture icon like Britney Spears.”