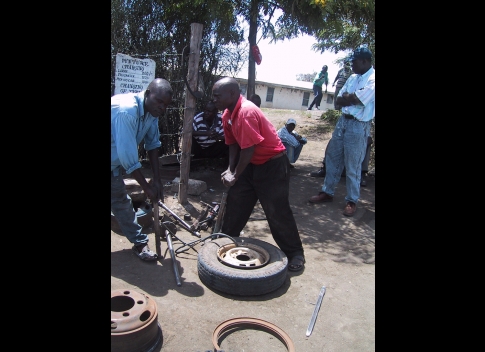 Shock waves of the economic downturn have a global impact, with few countries escaping the effects on their formal economies. But in the developing world, the informal economy continues to chug along as a significant motor for producing wealth for people beyond the reach of traditional financial institutions and government regulation.

Journalist Robert Neuwirth spent a year and a half reporting on the informal economies of China, Brazil, Nigeria and Paraguay for his book, “The Stealth of Nations: The Global Reach of the Informal Economy,” to be published by Pantheon Books later this year.

Published below is an interview with Neuwirth on the scope, nature and ingenuity of the informal economy, which he notes is “the oldest economy in the world.”

In your first book, “Shadow Cities: A Billion Squatters, a New Urban World,” you spent months living in squatter cities in the developing world. How did that lead you to your current project?

When I was reporting on squatter communities, it popped into my head that there was a whole element of conscious rebellion in the developing world. The straight-forward economy we take for granted in the United States shuts people out. In the developing world, they have to fend for themselves. They start businesses without regulations, without paying taxes. It’s huge. In many countries its bigger than the formal economy. It makes no sense to differentiate. The reality is that when more than 50 percent of the economy is informal, those are the people who are important.

How do you define the informal economy?

Anything that is evading regulations and anyone working in that industry is informal. I’m trying to differentiate; there are gradations of illegal, too. Obviously, part is outright criminal—arms dealing, drugs, human trafficking—but that isn’t the majority. If you talk to academics, they’ll say that maybe 25 to 30 percent is criminal. It’s a lot but not the majority. The majority is legal or quasi-legal goods sold in a quasi-legal way. It involves intellectual property—movies, DVDs or operating systems—everything from that to medical necessities, like drugs that are way too expensive to manufacture. So they’re manufactured off-patent, without a license.

What were some of the commonalities in the informal economies you report on?

Everyone is shaving invoices to claim that goods cost less so they can pay less taxes. Also, there is a lot of dealing in pirating of DVDs, brand-name products, Microsoft operating systems, you name it.

I went to Paraguay to look at cross-border smuggling. There is a huge trade moving goods from Paraguay to Brazil. It’s highly organized and massive because Paraguay is a zero-tax, zero-customs land, and Brazil is the opposite.

Which country has the largest informal economy?

Nigeria, by far. The statistic for the whole country is 75 to 80 percent of people work in the informal economy. The money numbers are shady because nobody really knows. But the generally accepted number is that two-thirds of the GDP [gross domestic product] is produced in the informal economy. That means that the typical small hawker on the street is more important to the country than big companies.

What about the oil giant Chevron, which is in Nigeria?

Chevron and Shell are outside companies. Although oil makes up a huge percentage of the economy, from the standpoint of the GDP, people on the street are more important.

Here’s an example of how the formal has recognized the importance of the informal: mobile phones. MTN, a South Africa-based company, came into Nigeria eight or nine years ago with the idea to do a very western, very British system of selling phones at stores. They crashed and burned. So they retooled their business concept. They now sell airtime. No one has a plan and everyone buys minutes and a sim card. The minutes are sold by a massive network of informal vendors. MTN sells minutes to distributors who resell them to people on the street. Most of the minutes are sold like that. MTN makes 90 percent of its income from selling through this huge, informal sales force.

That started me thinking about how formal companies deal regularly with the informal sector. If I am Proctor & Gamble and I want to sell toothpaste in India, I’ve got to get to where people shop. They go to informal kiosks in their neighborhoods. Colgate and Proctor & Gamble have to figure out how to get products into those kiosks. They hire distributors who get products into those places. If you talk to Proctor & Gamble, they will say they have close to zero growth in the United States and the developed world. Their growth is in countries where those stores are key.

What are the prospects of the informal economy given the economic downturn?

I would say the informal sector is poised to grow. In China, for November and December, exports went down compared to last year. Western demand will decrease and credit markets have dried up. In the first 11 months of 2008, almost half of toy exporters closed down. Some of that was in response to the lead paint scare, but some was in response to lower demand. So, people who can still buy are the merchants in the informal sector who buy with cash. When I went to Guangdong, China, I found there is an African community of traders—more than 100,000. They are middlemen and traders, shipping products back to Africa. They may pay some customs duties in China, although they work with their Chinese counterparts to fudge the invoices. But they pay mostly nothing on the African side. They aren’t counted in normal statistics. They exist purely with cash and their own initiative.

The informal economy depends on skirting regulations. Here in the United States, the talk is of more regulation to counter the too-free markets that caused the mortgage meltdown. Is it right that the informal sector avoid some regulations?

To be fair, informal traders did not create the market in derivatives. There is an actual product they sell. And I would argue that in the creation of derivatives, there is a need for more regulations. The rating agencies clearly didn’t know what they were rating.

But doesn’t the informal economy mean lost taxes that could be used to build schools? Or toys that contain toxic paint?

But let me point out that the toys in China were made by a contractor to Mattel. It isn’t the informal economy that is necessarily creating the problems. Tax evasion develops when the tax structure is unfair. In Nigeria, no one pays their fair share of taxes, including oil companies. It’s hilarious. There are huge signs that say, ‘Pay your Taxes.’ Government needs to show that there is a benefit to paying taxes. Government has been like a Ponzi scheme where most of the money goes in people’s pockets. I talked to one merchant who said, ‘I’m 40 years old and I never paid taxes, but I would if they showed me that money would be used appropriately.’

Bottom line is, when you have a high-duty, high-tax policy, you’re going to have smuggling. I’m not glorifying smuggling, but it’s understandable.

When gas prices were high here, there was an article that people put extra gas tanks on their trucks and went to Mexico to get gas where it was cheaper. That’s a form of smuggling. Everyone wants to avoid paying their fair share.

What is the status of the informal economy in the United States?

In the United States, compared to Nigeria and other countries in the world, the informal economy is tiny—eight or nine percent. But given the GDP, it’s the largest informal economy in the world at close to a trillion dollars. That’s a huge actual number. It includes some guy fixing cars in his home garage. It also includes formal businesses doing business informally. Here’s an example. The major daily newspapers in New York City—the New York Times, the New York Post, the Daily News and the Wall Street Journal—are sold at a discount in the afternoon hours near the major transportation hubs. They are sold by outdoor hawkers. These men and women don’t get a salary. They buy the papers for a lump sum and then keep as much money as they make. Do they declare this income? Doubtful. Is it an arms-length transaction? Yeah. They get the papers from distributors who buy from the papers themselves. But do the papers know about it and condone it? Absolutely. It’s the informal economy at work inside the formal economy.

The informal economy here is more of a small-scale, coping mechanism. The other aspect is people taking jobs for cash only, and not reporting their income, the day laboring based on economic necessity. But when you look at the formal economy and look at Walmart, and see that employees there don’t get the full spectrum of benefits, you have to say, ‘Well, maybe Walmart is an informal employer, too.’

What is the prognosis for the informal economy? Will it become more formal?

Governments have to figure out ways of interacting with the informal economy, from direct investments to making infrastructure improvements that make informal markets work better, to reducing customs’ duties and tariffs. There still will be some smuggling, but people will have less incentive. The solution isn’t to say, ‘Formal good, informal bad.’ The solution is to see what works in the informal economy and improve that and make it better.