Home Opinion Should Susan Rice Go to the U.N.? 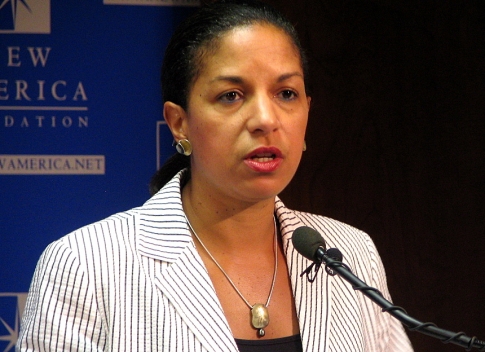 The thrashing the Israelis are administrating the Palestinians makes confirmation hearings for Susan Rice to become United States Ambassador to the United Nations all the more notable.  If mainstream media focuses on her becoming the first African-American woman to hold that post, they will be misleading and feckless gestures. When confirmed, Susan Elizabeth Rice will follow three African-American men who have served as America’s ambassador to the U.N.: Andrew Young from 1977-1979; Donald McHenry from 1979-1981; and Edward Perkins from 1992-1993.

America’s posture at the U.N. has been an unwavering tilt toward Israel. America’s first black UN ambassador got the boot for “controversial” statements about Israel and meeting with the Palestinians. Appointed in 1977 by President Jimmy Carter, Young’s tenure was short. In 1979 Young said on network news that Israel was “stubborn and intransigent.” He made the mistake of meeting with representatives of the Palestine Liberation Organization “in violation of American law,” and Carter sacked him.

Dr. Rice is unlikely to make Ambassador Young’s mistakes of seeking fairness and balance on the issue. President-Elect Barack Obama’s choice of Rice to represent the U.S. before the U.N. will make her one of his administration’s most visible faces to the international community. So, when Rice meets with the Congress for confirmation to the $150,000-a-year post, there’s unlikely to be new revelations about ways to overcome crisis situations such as occurring in Gaza and the Middle East.

Rice is required to be confirmed to the post by the Senate; subsequent to that proceeding she and Obama will likely continue American patterns of hegemony. America has tenuous relations with the UN body, particularly over issues such as the Palestinians plight, but Obama’s act of restoring the UN ambassador’s post to cabinet rank supposedly indicates he means to work with the world body. Obama says Rice will pursue goals of greater U.S. engagement with other countries and multilateral institutions: “She shares my belief that the U.N. is an indispensable and imperfect forum,” said Obama. “She will carry the message that our commitment to multilateral action must be coupled with a commitment to reform.”

How successful will Dr. Rice be mending America’s rocky diplomatic fences with the U.N.? There is some concern that Rice’s appointment sends the wrong signal. During the Clinton administration, Rice worked for the National Security Council and the State Department, primarily on issues related to Africa. Recently her specialty at the Brookings Institution think tank was on the global impact of weak and failed states. Rice greatest claim to fame has been criticizing what she calls Sudan’s genocide in Darfur. At a recent TransAfrica Forum, the group’s chairman of the board, actor/activist Danny Glover, said the organization is “conflicted” on Dr. Rice’s appointment and whether she’ll “focus to shape new policy directions that prioritize inclusive human security, multilateral approaches, and interdependence with other nations rather than focusing narrowly on bilateral and militaristic responses”.

If Rice continues U.S. imperial hubris coupled with practices toward Israeli interests, her role at the U.N. will be divisive. Israel is the top recipient of US foreign aid. Since its founding in 1948, America’s military and economic assistance totals over $100 billion. As the horrific conditions were occurring in Gaza and the U.N. Secretary General condemned the acts, the U.S. Senate (that will confirm Rice) passed a non-binding resolution “recognizing the right of Israel to defend itself against attacks from Gaza” and reaffirmed “the United States’ strong support for Israel in its battle with Hamas.”

Since President Carter brokered the Israeli-Egyptian peace treaty in 1979, Israel has received up to $3 billion in annual aid from the U.S. Egypt receives the U.S.’s second largest aid package — $1.3 billion in military and $415 million in civilian aid. Aid to the Palestinians was frozen when Hamas won elections there.

America is not even-handed in the Gaza crisis. It’s folly for Congress to have Rice go off to the U.N. mission parroting “humanitarian concern” for “genocide occurring in Africa,” while condoning U.S.-involvement in genocide being perpetrated on Palestinians.