Home Blogs Helen's Blog Nameless: He is so Mannerless 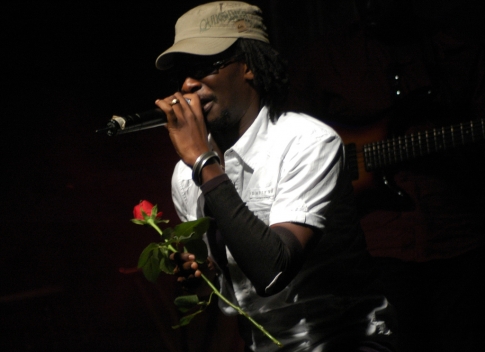 Minneapolis was definitely the place most East Africans were a weekend ago to watch David Mathenge, famously known as Nameless, in concert. Performing at the Blue Nile restaurant, the artist showed up on stage dressed in shiny black pants, a white shirt and a sport coat.

The coat was quick to come off, and the shirt unbuttoned to the chest due to the heat brought about by the extensive crowd. Nameless began his concert with one of his high energy songs, Manner less that got the crowd wild and loud. Dj Kaydee, from Kenya matched up with the zealous performance presenting his skill amicably on the turntables.

Nameless whose popular songs include Sinzia, Ninanoki, Maisha, Furahiday, just to mention a few, has a knack to put down lyrics that are easy to remember, enjoyable and relatable. The large audience out to watch one of Kenya’s favorite performer sang along to the entertainers songs. The cheering and applauding to every word he spoke and dance gyration he made was deafening.

The front row next to the stage where I and other ladies were standing was a vantage point for me to watch the artist give a performance that was both interactive and very engaging. A few ladies got the opportunity to join Nameless on stage and dance with him. One catchy moment of the concert was when two ladies got on stage and performed a dance routine to Nameless’ song “Deadly”. The artist, though stunned by the sudden impromptu performance, joined in and the three seamlessly danced together, much to the audiences delight. His recently released song “Salary” which features a very well choreographed video has become a major hit with many. One fan who has mastered the choreography got on stage and excitedly danced to the song.

Nameless gave a performance that will well be remembered for long, just like his music. He took the opportunity to mention the late E-sir with whom he recorded the hit “Boomba Train”. It’s easy to see why he attracts so many to his shows. Nameless is an accommodating, stimulating and interactive entertainer.

Nameless, who is married to another popular Kenyan artist, Wahu, has won and been nominated for awards like the Kisima Awards and Tanzanian Music awards. He has been listed as one of Kenya’s most influential people. Nameless and Wahu have one child a girl, born a few years ago.

Helen blogs on the Minneapolis nightlife and entertainment scene. You can read her entries here.