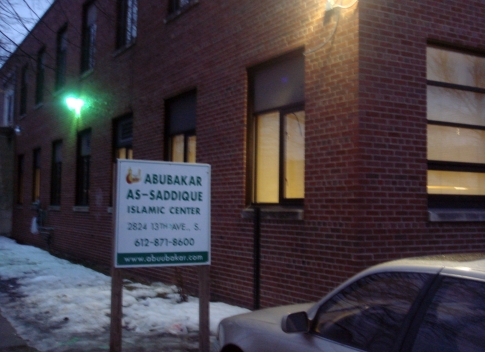 Minneapolis, Mn–Leaders of the Somali and Muslim communities came
out in a united front to address what they called “the inaccurate and
unfair portrayal of our mosques and Imams”.

Mid last year, about 20 Somali men were reported to have been
recruited from Minneapolis to fight a holy war in Somalia. The Abubakar
As-Saddique Islamic Center was rumored to be connected to their
disappearance. “It is unfortunate that some individuals in the Somali
community unfairly accused the Abubakar Center to have links to the
disappearance of the young Somali men. We strongly deny these
unsubstantiated allegations. Abubakar Center didn’t recruit, finance or
otherwise facilitate in any way shape or form the travel of those
youth,” said Adbirashid Abdi, a member of the board of directors of the
Abubakar Center . (Full press statement here)

“This is a trying time for not only the Somali community, but the Islamic community. We need to show our solidarity,” said Imam Makram El-Amin of the Masjid An-Nur mosque.

The leaders accused the media of reporting statements from individuals with personal biases against the mosque presenting many problems for the Somali community. They called for the investigation of those who have an interest in destroying the mosque. According to Abdi, the mosque had to recuse itself from assisting the affected families, and let law enforcement step in, as they did not want to be further implicated. The mosque feared that reaching out to help these families would make it seem like they were trying to intimidate the families or silence them

Travel plans for many Somalis have since been frustrating. Speaking for the first time in public since being barred from getting on a flight last year, Abubakar Center youth coordinator Abdullah Farah complained about his experience. “I was denied boarding a flight to do my religious duties without any answers to this day. Our community is overwhelmed as confused and want to solve this as much as you do,” he admonished.

President of S.Y.N.C (Somali Youth Network Council), Osman Mukhtar, was held up at the Chicago airport for two and a half hours on a trip back to Minnesota from Europe where he was visiting his family. “The media needs to listen to all sides of the story,” he insisted. Mukhtar was friends with two of the missing men, “I knew them by different names, so I was shocked to see their pictures in the paper.” One of the men, whom he knew as Abdi Salam, gave him a ride to the Brian Coyle Center just a few days before his ‘disappearance’. “Our conversation was regular talk, he asked me how I was doing and I asked him how he was doing,” he remarked.

Mukhtar admits that there had been a change in his friend’s character right after Ramadhan, “He listened to the Quran all the time.” Mukhtar explains the dilemma facing many young Somali men, “They can’t get a job, they are confused and have been kicked out by parents for being in gangs. Some say to themselves, I did these bad things in the past, how do I cleanse myself? Maybe that’s why they would go back to fight a holy war.”

But that’s not the story for all troubled Somali youth. Farah Mohamed had a dark past, but now works with at the Abubakar Center with the youth. “Abubakar means the world to me,” he expressed. “I used to be in gangs and even went to prison. Abubakar helps us grow,” he said drawing cheers from the crowd.

Some complained that the negative press has resulted in repeated FBI interrogations. Samiya Ahmed, Rukia Mohamed and Sarah Qaxiya were Facebook friends with some of the missing. The authorities went to Ahmed’s house with photos of the missing men asking her if she knew any of them. “When they came to my house it took me by shock. I have never had any encounters with the law,” said the Normandale Community College student. “I even received a phone call the day before inauguration day asking if I know anyone who is going to bomb the inauguration,” she added.

“We are American citizens and we love this country. This is the president we elected. They think they are helping, but they are pushing us away,” said Mohamed who went to high school with one of the missing kids. “The FBI has to find a different way to do this,” said Qaxiya.

This article first appeared in the TC Daily Planet.