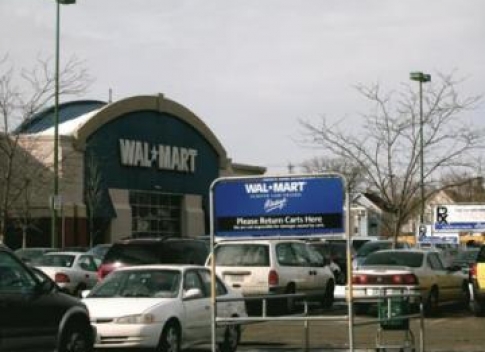 Semenyo Ahli gathers stray carts in the Wal-Mart parking lot on University Avenue in St. Paul. He came to the United States four years ago for economic opportunity and to attend college to become a registered nurse. Despite being qualified to work as a nursing assistant, Ahli has been unsuccessful in finding a second job in addition to Wal-Mart. However, no matter how tight the money gets, Ahli still sends money back home to Togo every month. “I have brothers and sister back home,” he said. “And my dad is not working, so they use the money for food.”

“I got a job here because of my friends,” he said. “They helped me to get a job here. I did apply to Target when I first started looking for a job, but I didn’t get it.” The $8.20 an hour he earns from pushing carts has to cover not only his living and education expenses, but also to support his family back in Togo. His family largely depends on remittances to survive, but sending $300 monthly is becoming a financial burden. Recently, his hours at Wal-Mart were cut from thirty-six to twenty hours a week. Like Semenyo Ahli, several of his fellow employees have reported with frustration that their hours also have been cut recently.

Store managers at Wal-Mart on University Avenue declined to answer any questions.

Greg Rossiter, a spokesman for the corporation, said he was unaware of any decrease in employee hours in any part of the country. Wal-Mart officials claimed that their recent economically driven decision to lay off eight-hundred corporate employees in the Twin Cities would not negatively affect their store associates or their hours, according to Rossiter.

In response to questions about reductions for Wal-Mart employees in St. Paul, he replied, “Wal-Mart reduces hours of our associates depending on customer demand.” However, customer demand is on the rise across the country. According to a corporate financial fact sheet, sales at Wal-Mart were up 6.2% in 2008, and the Wal-Mart on University Avenue is one of their busiest locations in the Twin Cities. Rossiter said, “It is typical to cut employee hours right after the holidays.” However, several employees reported their hours being cut only within the past three weeks.

The majority of the associates at Wal-Mart on University Avenue are immigrants from East Africa, most of whom support families back home. According to one employee, Burhan Mohamed, approximately forty of these employees are on the floor at any given time, working less and less hours a week while trying to support themselves and their families. Though he was hired as full-time three years ago, Mohamed reported that he has recently been demoted to just above twenty hours a week.

The decrease in full-time work has made it increasingly difficult for employees to survive and attain benefits. If an employee cannot work full time, which is more than thirty-five hours a week, then full-time pay of $10.25 is unattainable. In addition, the standard six-month pay increase appears to becoming a rare privilege, with employees reporting not receiving a raise in as long as a year and a half. Employees like Burhan Mohamed and Semenyo Ahli do not blame Wal-Mart for this stretch of reductions in hours, but instead the ailing economy.

Since the recent store-wide cut in hours, Semenyo Ahli now takes home less than $700 a month while working twenty hours a week, meaning the $300 that he sends back to his family in Africa takes up 44 percent of his paycheck.

Though it is a financial strain, Ahli remains loyal to providing his family with food and means for going to school. “They use the money for my sister and brothers, ‘cause they all go to school,” he said.

Ahli’s situation is common among Wal-Mart employees who came to America in pursuit of a better life for themselves and their families, and are now struggling to work an adequate number of hours to survive financially. For the employees who place the blame on hard economic times, this stretch of reduction in hours has led to fear of losing their jobs altogether. Burhan Mohamed summed up the general feeling of these employees. When asked if he’s worried about losing his job he said, “I’m scared, it could happen tomorrow to me. You don’t know.”

Jaclyn Evert is a journalism student at the University of Minnesota and documentary filmmaker.