Home Features Deciding the Future of the Somali Community 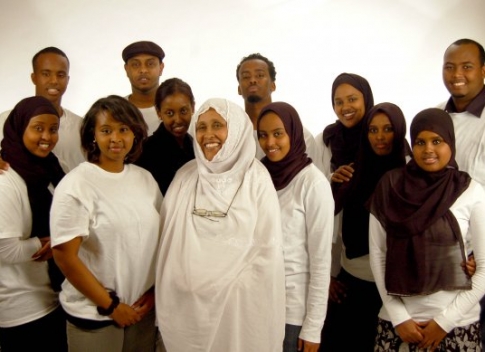 Minnesota is home to the largest settlement of Somalis in the United
States. And young Somalis here are beginning to find their voices in
their new home. They will speak and act against youth violence among
their own. They will fight media and mainstream perceptions of their
culture. And they will build a new Somalia.

Minneapolis, Mn – In the span of a year six young Somali men died
from gun shot wounds in gang-related violence. Less than a year later,
another controversy spun the Somali community: federal authorities and
media reports link one of the largest Somali mosques in Minnesota to
the alleged disappearance of young Somali men. The community continues
to react in shock and disbelief as their most sacred leaders and house
of worship are denigrated.

The Somali community realizes that some of the problems that they are grappling with go beyond perception of the larger Minnesotan community, and media reports.

Enter the Beat, an organization started by a group of young Somalis who are interested in addressing head on the critical issues impacting their community. The Beat is a project under Horn Relief hoping to give Somalis interested in the peace and development of their country a venue to get involved. Horn Relief, a development and humanitarian organization in East Africa is an oasis in a country entrenched in an eighteen-year conflict, which not only includes a devastating civil war, but also a brutal foreign occupation by Ethiopian military troops. The Beat Project hopes to take part in the revival of coastal communities in Somalia and promotes an independence from the harsh charcoal trade in the country that continues to destroy pastoral communities. Environmentalist, advocate, and Executive Director of Horn Relief, Fatima Jibrell, saw potential in local youth who wanted to bring her work to Minnesota.

Ayan Abdi a young engineer who walked away from a comfortable job with the State of California, is one of the founding members of The Beat. Abdi was seeking something deeper when she left California and found her niche in Minnesota through organizing. After helping establish the project, Abdi hopped on a plane and is currently in Nairobi, Kenya volunteering for Horn Relief. Her co-organizers and friends continue working in Minnesota.

Members of the group strongly believe in the notion of having Somali solutions to Somali problems. They also see intrinsic power in young people, and continue to educate Somalis on their country’s geography and resources. According to a statement by the group, “The Beat focuses on shifting the minds and energy of the youth back to their homeland whereby they can sew the seeds of education, environmentalism, and economic prosperity and ultimately reclaim themselves to be the Somalia that they want to see.”

For many young Somalis, their memories of Somalia reflect the civil war experience – the burden of the ongoing catastrophe is the only element of Somalia in their collective memory.  Horn Relief hopes to involve Somali youth in their work.

While The Beat organizes at an international level, several other youth-lead groups address intensely local issues.

In the aftermath of the shootings that occurred last year, several organizations were created by Somali youth to better serve their peers and their community as a whole. The most prominent of these groups is Students Against Violence (SAV), which is organized by current University of Minnesota students and alumni. The group is known for a protest they organized at Peavy Park in October last year where they spoke against gang violence, and for a need for young Somalis to engage in positive recreational activities. They voiced their rage, and expressed their frustration at the loss of youth who had so much potential. One of the young men killed was Augsburg University student Ahmednur Ali who worked as a mentor to other young Somali men at the Brian Coyle Center.

Young Somalis were most deeply awakened by the violent events. SAV is currently meeting with policymakers and community organizers to make impacted neighborhoods safer.

SAV member Hanan Osman says that their group needs engagement, “Instead of turning the other cheek, we want people to know what is going on in the Cedar-Riverside area. We hope to raise awareness on safety issues… and we are here to get things done.”

The Youth Council at the Dar Al-Hijrah Islamic Civic Center is another youth-lead effort also developed from a painful context. They saw a broader community unable to understand its new neighbors, and a sub-population struggling to maintain its identity. The group attempts to empower youth, but also hopes to educate other Minnesotans about Islam and Somalis.

The Islamic civic center works through education to teach the general community about this large and growing population.

Kaamil Haider, member of the youth council, hopes to make the center more than a place of worship. He says the group views the mosque as a religious institution, as well as an epicenter for social justice, identity building, and organizing.

When pressed on the identity question, he shared, “there’s a dilemma between Somalis who grew up here and those who were raised in Somalia. The majority of the last population has not opened their bags.”

Haider contends younger Somalis can be more invested in the community because they are part of the American fabric. With one foot in Somali culture, and another in the American one, they are transnational and are consequently more familiar with the mainstream culture, he says.

They have an incredible ability to understand both cultures and maneuver around barriers. Haider agrees that it is not easy for immigrant youth to automatically fit into the mainstream culture as some Somali youth continue to experience an identity crisis. Trapped between dual identities that are sometimes at loggerheads, these youth do not know where they fit. In addition to experiencing the tragedies associated with growing up poor and black in America, they are also immigrants with a painful legacy and present – carrying incomprehensible memories difficult to cope with, and language and cultural challenges.

The Islamic civic center understands this unique reality, which city, state, and civil society groups have yet to adequately address. The center has workshops for young people and creates an environment conducive to discussions.

Youth organizing is not limited to the aforementioned groups. Other organizations, like the Somali Youth Network Council, the United Somali Movement, and a slew of other groups recently created to address a wide range of needs, including community reconciliation, political advocacy, and education. These organizers are politically and socially savvy and they maintain broad social capital. Together, they hope to tackle issues in Minnesota’s Little Mogadishu and in Somalia.   Youth organizers represent the outrage and energy that grew from a painful year marred by murders among Somali youth, a social and humanitarian catastrophe in Somalia, and “the missing” debacle. These young Somalis concentrate on addressing critical issues while also empowering their peers, restoring hope in the elders, and creating a more harmonious community for all.