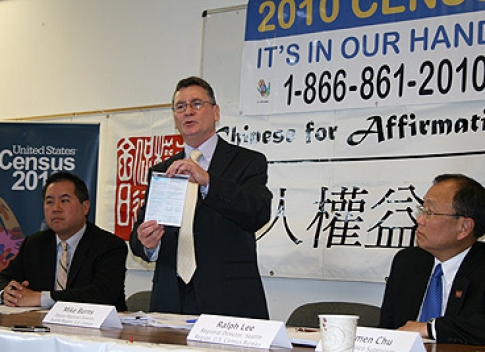 SAN FRANCISCO – On April 1, 2010, less than a year from now, a snapshot of the whole population of the country will be taken. Whether you are a citizen, an immigrant, legal, illegal, homeless or an international student, if you are in the United States at that time, you will be counted.

How important is it to be in the snapshot? How do we get everybody in it? These questions were answered at a May 5 roundtable discussion at New America Media, where ethnic media met with government officials to discuss how to get the message out to those who are most likely to dodge the “snapshot” — immigrants and minorities.

One reason that immigrants, especially the undocumented, may not want to be a part of the census is that they are afraid that their information will be used by government agencies against them.

“Immigrants tend to have fear and suspicion toward government agencies because of issues like race and profiling that the government used to sanction,” said Susan Hsieh, representative for Chinese for Affirmative Action (CAA). “A lot of distrust and fear are the response to what has been happening in history. The big job for the Census Bureau is to work together to inform people that they don’t need to be afraid, there is no way that the Census Bureau will use that information to put them in jail or deport them.”

In fact, of the 10 questions on the census form, which is printed in five different languages including Chinese, Vietnamese, Spanish, Korean and Russian, not one question asks about immigration status. So even if someone attempts to use that information — which is illegal — it is impossible to find out someone’s residential status from the census data, said Carlos Rodriguez, a partnership specialist with the U.S. Census Bureau.

A group of Latino evangelical pastors recently has called for a census boycott among undocumented immigrants. Rodriguez, who is doing outreach to the Hispanic community, said that “the effort of the proposed boycott is misguided.” Being part of the census can actually increase a community’s political influence. “These people do not understand the impact,” he said. “It is ironic because they’ve been fighting for equal rights, equal access to health care, education and all that for the last 50 to 100 years.”

Rodriguez said that the Census Bureau will not respond directly to the boycott, but instead they will reach out to the community in a more positive way, explaining why it is important and how easy it is. This is where the ethnic media come into play.

Being the first avenue that immigrants go for news, ethnic media play a significant role in helping the census improve the count because their readers are the ones who historically have been undercounted, said Phil Ting, assessor-recorder of San Francisco. Ting said San Francisco has an undercounted population of 100,000 which, if it had been figured into the population, would have gotten the city an extra $29 million per year in funding. And ethnic newspapers, TV and radio programs are the media that enter the living rooms of many in this undercounted population.

It all comes down to money, and every single person matters. Key local, state, and federal decisions are based on census data. Population figures not only affect political representation; they also help determine how the $300 billion in annual federal funding is allocated, said Ralph Lee, regional director of the U.S. Census Bureau’s Seattle region.

This goes back to the fundamental of democracy — one vote, one voice, said supervisor Carmen Chu. The census data will be used for reapportioning seats in the House of Representatives, and drawing the district lines.

Mike Burns, deputy regional director of the U.S. Census Bureau’s Seattle region, suggested that immigrants take a look at what effect the census data has at the local level. “Look around the neighborhood,” he said. The schools, community centers, immigrant transition English classes are all affected by the census, which counts the population, and decides how much government funding it is getting.

“Because San Francisco is a sanctuary city, basic city services are provided to people without status,” said Hsieh. “To be counted is a way to make sure their neighborhood gets the money to run these services, so that everbody benefits.”

Jane Xiao, a reporter for Sing Tao Daily, thinks that the Chinese community will actively participate in the census because many of them are from Hong Kong, Taiwan, and China, where large-scale censuses are conducted regularly. “The methods may be different,” she said. “But people get the idea.”