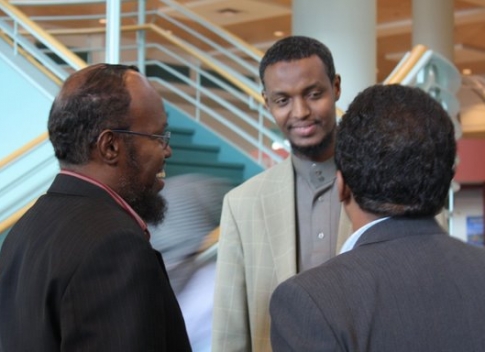 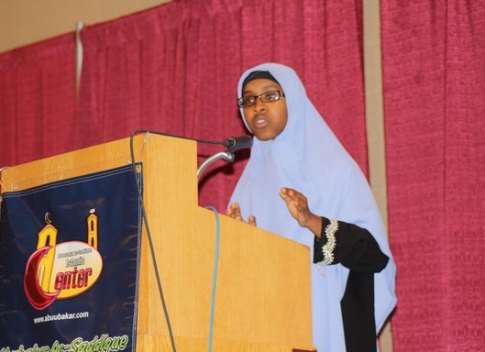 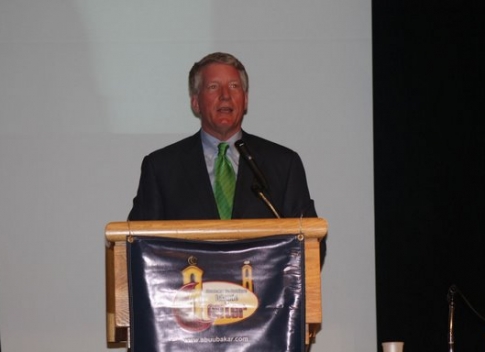 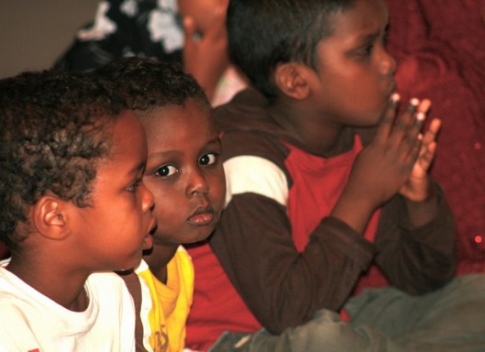 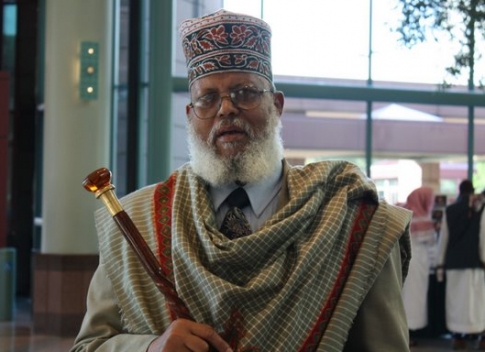 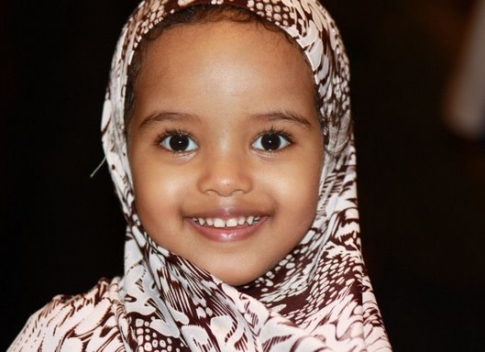 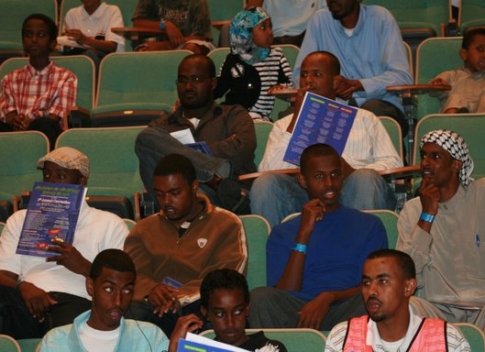 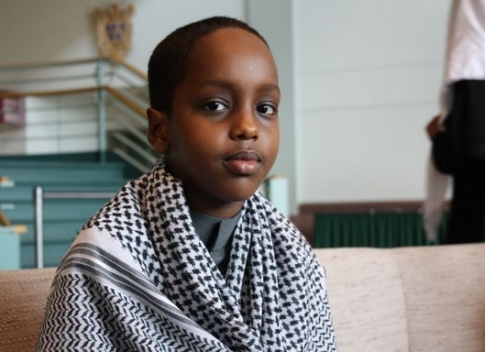 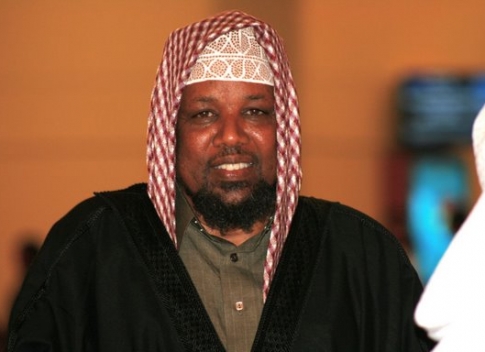 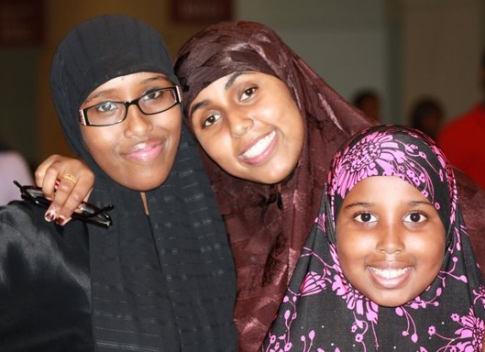 Despite fears of distractions from  the missing Somali youth saga that has engulfed the Somali community in Minnesota, the Abubakar As-Saddique Islamic Center held its 9th Annual Convention at the Minneapolis Convention Center over the  weekend where thirty speakers addressed 10,000 people over three days. Participants said it was encouraging to see the number of attendees, the breadth of topics, and the scope of talent.

Despite a tumultuous year, the mosque saw increased attendance at this year’s convention and a spike in monetary support. Since last fall, the mosque has come under fire for the “missing youth” debacle, a connection that the mosque administrators and its supporters continue to deny. People close to the mosque did not believe the annual event would occur this year, they feared that the need to address the allegations would distract the administration and volunteers from organizing the convention. But after successfully meeting fundraising goals and having a record attendance with the help of 200 volunteers, the Abubakar community believes it maintains the trust and love of the Somali community. “This crowd and their energy is a testimony to their commitment to the mosque and its respected leaders,” attendee Ali Abdi said.

People travelled from Columbus, Nashville, Toronto, Kansas City, and across the United States and Canada to listen, learn, and meet. Hundreds of others logged-in to a live broadcast through several websites that serve the Somali community. Twenty-year-old Anab Ibrahim travelled from Seattle to attend the convention. “We came because my aunt was impressed with the line-up. When we arrived, we were amazed with the number of people we saw standing and sitting around in the lobby… we were even more shocked to see the packed auditorium,” she said. At the peak of the event on Saturday, an estimated 7,000 thousand people filled the two auditoriums. Anab said she especially enjoyed the English lectures. “Other conferences are only about the politics of Somalia, and often make us feel hopeless. This was applicable to our lives here and our faith. It showed me what we could do for our community and ourselves.”

Speakers addressed a wide range of topics, including the future of Somalis in the diaspora, the prevalence of autism, the importance of knowing your rights, the danger of gangs and extremism, the notion of Islam as mercy among others.

The only wrinkle on the conference was keynote speaker, Sheikh Mustafa Harun, being denied entry to the United States upon landing at Newark airport. He ultimately addressed the audience via webcam the following day. Participants expressed outrage over their revered scholar being denied entry. Harun said he checked in with the U.S. Embassy in Norway weeks prior to his scheduled flight and was told he should not encounter any issues. Norway has a visa waiver program with the United States. Despite his attempt at planning ahead, he did not make it to the convention. After a 9-hour flight, he was questioned for 3 hours and was told that although his identity was cleared, he must leave the country. He was allowed to make a call before boarding another 9-hour flight back to Norway.

Other speakers included imams from around the U.S. including Minnesota, among them Sheikh Abdirahman Sheikh Omar, Sheikh Abdirizak Hashi, Sheikh Jamel Bin Ameur, and others. Audience members were astounded by the knowledge and wit of 12-year-old Mohamud Ahmed Mohamud, who was introduced as “Sheikh Mohamud.” He related the story of Salman Al-Farisi, a historic figure in Islamic history, and spoke on the importance of seeking knowledge and asking questions. He shared the Somali proverb of regret where a person says, “when I had youth, I did not want to learn, and when I had age, I wished I had learned during my youth.” Mohamud says he wanted to send a strong message to the youth, and encourage them to take advantage of their time. “I want young people to step up to the plate because I see so much good in them and it’s time for the youth to rise,” he said. Mohamud spent the past three years helping in the bookstore of the mosque, reading and writing as he could.

Gubernatorial candidate Steve Kelley, and Constituent Advocate to Sen. Amy Klobuchar, Siad Ali spoke on the health, education, and anti-immigration sentiment. Klobuchar addressed the audience by video where she touched on the cultural and intellectual wealth Somalis bring to Minnesota. Minneapolis welcomed Abukar Arman, the President of the CAIR chapter in Columbus who did a “know your rights” presentation in Somali, while members of the local chapter of CAIR did a program in English. “It’s important for people to understand their legal rights and the implications of their actions – intentional or not. Wanting a lawyer is not an omission of guilt. We want people to cooperate with law enforcement and we want them to know their rights,” he said. Arman also addressed the allegations against certain mosques in the city, saying that, “we’re finding that people are being judged by public opinion, which is ridiculous because this is a nation of law and order, and rumors should not absolve or condemn people or institutions of allegations. Rather, this should be determined by an established legal process.”

Poets Sara Mohamed and Maryam Warsame made their début at the convention. Warsame is one of three organizers for the mosque’s “Youth to Youth” group, a mentorship program for young women. Sara is a student in the program, and the two began writing together this winter. They rhymed about the situation of women in their homeland, and shared the stories of those who did not find relief. “We don’t want to be famous, we just want to get message out and not forget about those who are suffering,” Warsame said. She added that the convention was a good opportunity for students to share their work.

In addition to the poetry and lectures, the convention also included a fundraising component. In a little over an hour, participants pledged $150,000 to help cover expenses incurred over the construction of the second floor of the mosque, as well as to jump-start the next phase of development. The administration hopes to complete the parking lot and make the exterior of the building more visually pleasing.

It is difficult to imagine that this is the same institution that operated from a garage in the Cedar-Riverside neighborhood – the epicenter of the city’s newest wave of immigrants. Founding member Abdulaziz Sugule says this vision for a mosque comprehensively serving the community started over a decade ago and the organization began operations in 2000. Then called the Imam Shafi’i Mosque, the name was changed to the Abubakar As-Saddique Islamic Center and the organization moved to an abandoned warehouse in South Minneapolis. “Today, that vision is a five million dollar project,” Sugule said. “The mosque plays a major role in advancing the community; it consists of all kinds of social services including providing family counseling, settling community disputes, celebrating Islamic holidays, working with local and national government leaders, mentoring youth, and providing a place of Islamic worship and education,” he said.

Looking up with a smile, he added, “Contrary to what some people are saying, they (the mosque administration) are trying to build a healthy community with good people… they’re starting a movement for positive change and people love the place and its people.”