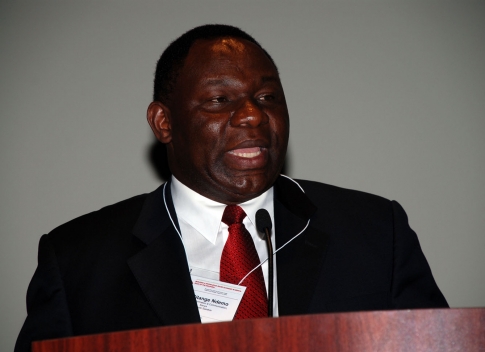 The permanent
secretary said Africa’s future lies in innovation to make the continent
competitive. “Without innovation we cannot become a competitive
nation”.  Amid laughter, he said in
his own Kenya there have been cases where people pay a fee to learn how to
solicit for aid for their projects from overseas donors.

He said
the innovation of Africans is currently in display in Kenya where the landing
of the fiber optic cable has given rise to entrepreneurs who are readying
services to offer to the public. He said the recent introduction of Digital
Villages by his government in remote places an offshoot of the fiber’s landing
has spurred new businesses such as one he saw where a young gentleman had
Kenyan women in one village crowding around one computer monitor to learn about
breast cancer and charging them ten shillings (about US 25 cts). ‘The
innovative capabilities of Kenyans will amaze you when given the tools”,
he said.

Dr.
Ndemo’s keynote address which centered on the conference’s theme of Building a
Knowledge Based Economy in Kenya tackled the myriad of issues that face his
country including poverty. On poverty, the PS said that a contributing factor
is the unwillingness to embrace science giving the example of the U.S. where only
3% of the population feeds the nation as compared to 60% of Kenyans who are
involved in some form of food production.

The PS
said 1/3 of the global poor will be from Africa “if we don’t do
anything.”

The
conference got underway yesterday and concludes tomorrow.