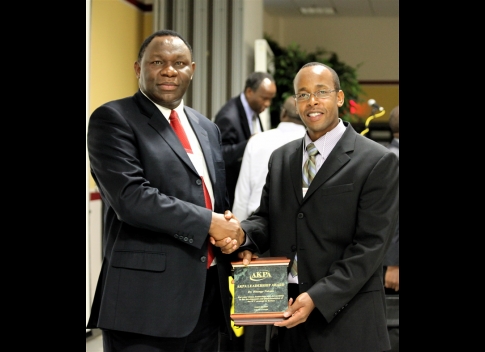 ATLANTA
– Dr. Bitange Ndemo is the recipient of the 2009 Association of Kenya
Professionals in Atlanta (AKPA) Leadership Award. Dr. Ndemo was presented with the award at the
2nd Kenya Diaspora International Conference and Investment Forum held at
Kennesaw State University. Dr. Ndemo is the Permanent Secretary in Kenya’s
Ministry for Information.

The leadership
award is given annually to a person “who, through their actions, leadership,
courage and passion, has had a profound impact on the society and has served as
an inspiration to others”, the AKPA vice-chair, Hana Njau-Okolo said in announcing
this year’s recipient.

Dr.
Ndemo, a former Diaspora Kenyan himself, is a favorite of the Kenya Diaspora
community for his ability to break down government policy in a language that
“we can understand”, said one conference participant.

Ms.
Njau-Okolo described Dr. Ndemo as a “maverick, visionary and a
pioneer” for working tirelessly to provide technology access to the
ordinary person. Ms. Njau-Okolo was full of praise for Dr. Ndemo’s mentorship
to the country’s youth and Kenyans in the Diaspora and in particular the encouragement
he has provided to those in Diaspora.

Accepting
the award Dr. Ndemo said in characteristic humor that he “was humbled as I do not receive many
presents.”

Past
recipients of the AKPA leadership award include Noble laureate Wangari Maathai.