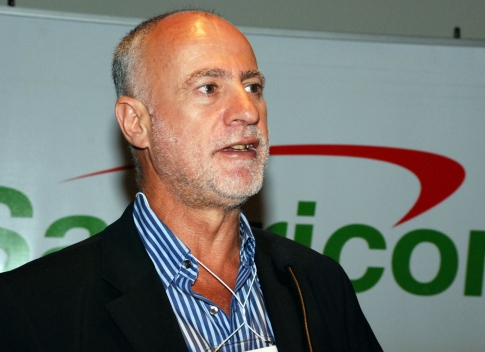 ATLANTA – Kenyans
banks have reason to fear as M-Pesa, the money transfer service offered by
Safaricom primarily targeting the unbanked Kenyan populace grows in popularity,
the company’s CEO Michael Joseph said during an address at the 2nd Kenya Diaspora
International Conference and Investment Forum in Atlanta. “It costs you
Ksh. 300 to withdraw your money from your bank account,” he said.

With
only 40.5% of Kenyans having a bank account, M-Pesa has experienced exponential
growth to attain over 7 million customers as of July 2009.”In Western
Kenya, they will not sell you beer if you are not paying with M-Pesa,” he  told conference participants to loud laughter.
He said the total value of person-to-person transactions stood at Ksh. 210.27
billion.

The key
to his company’s success with M-Pesa has been the distribution network, a feat
not many in other countries have been successful when attempting to offer similar
services.

Mr.
Joseph said his company’s deliberate strategy to brand itself as a Kenyan
company has paid dividends as can be seen in the commanding market share that
the company enjoys. “We have always used Kenyans models and landscapes in
our advertising and branding,” he said.

The
success of Safaricom has however made it the company to beat. “All my
competitors tailor their marketing campaigns around how to beat us,”
according to Mr. Joseph.

Mr.
Joseph’s keynote address also touched on recent developments following the
landing of the fibre optic network in Mombasa. There has been a 200% increase
in data usage, he shared with conference participants. He sees data as the next
big thing in mobile services in the country.