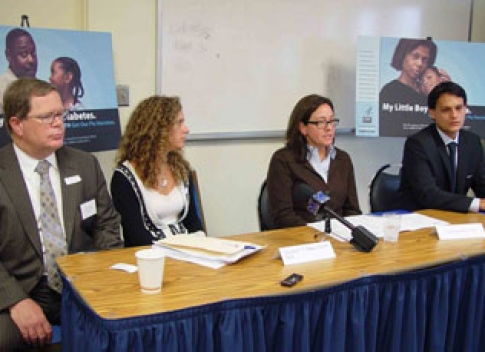 LOS ANGELES – Aside from pregnant women and children, such high risk
communities as African American, Hispanic and Native American should
get vaccinated against the H1N1 virus because many of them suffer from
chronic health disorders or compromised immune systems, said a federal
health official.

“Even though we’ll be offering the vaccine to everyone who wants to get
vaccinated, we’ll give priority to the most vulnerable people,” said
Felipe Lobelo, an epidemiologist with the Centers for Disease Control
and Prevention (CDC), at a New America Media-organized ethnic media
briefing on Oct. 13.

“We’re excited to be able to reach all these communities through you,” Lobelo remarked.

A highly contagious form of influenza, H1N1, also known as the swine
flu, was first detected in the United States this past April. Since
then, the nation has seen a number of cases in nearly every state.
Nearly 1 million people have so far been infected, and 600 people,
including 76 children, have died from it. Around 6,000 people have so
far been hospitalized.

“Our priority group (for the vaccine) will be those between 6 months and 24 years,” Lobelo said.

Even though the benefits of the swine flu vaccine greatly exceed the
risks, and even though the CDC is making every effort to publicize
this, Lobelo said he expects that around the same number of people who
die each year in the United States from the seasonal flu — 36,000 —
will die from swine flu.

He stressed that the flu shot would have what health officials call a
“cocoon effect,” that is, it will protect not only the person getting
vaccinated but all they come in contact with, as well.

For this reason, Lobelo also advised healthcare workers to get vaccinated.

The virus strikes hardest in children and young adults who have none of
the immunity to the strain that older people have perhaps because they
have had previous exposure to strains akin to influenza, he said.

So far, the pandemic has been moderate in severity, with the symptoms
resembling the seasonal flu – fever, body ache, cough and cold, Lobelo
said. But he sounded a note of warning: Sometimes, the symptoms go away
and return more intensely.

Children, 9 years and younger will need to get two shots, 21 days
apart, because their immune response from the vaccine is different from
that of older people, who need only one shot, Lobelo said.

The vaccine could be administered as a shot or in the form of a nasal
spray, which is approved for healthy persons between ages 2 and 49
years, who are not pregnant and who do not have underlying medical
conditions.

Alan Janssen, health communications specialist with the CDC’s National
Center for Immunization and Respiratory Diseases, noted that his agency
is “trying to share the vaccine as fairly as we can.” That means,
communities with larger populations will get larger number of doses of
the vaccine, he said.

The undocumented should also get vaccinated against the H1N1 virus when
the vaccine rollout program begins in Los Angeles County on October 23,
said Michelle T. Parra, who directs the county’s immunization program.
No questions will be asked about anyone’s legal status, she asserted.

She said her agency would be working with the city, which has already
identified several venues where people can get vaccinated. The city
will embark on an intensive outreach program.

The United States expects 200 million doses of swine flu vaccine by the
end of the year, as pharmaceutical companies are churning it out at
“unprecedented speed,” but not at the expense of compromising its
safety, health officials say.

“The H1N1 vaccine has been created the same way as we create the
seasonal flu vaccine, with the same safety and rigor,” Lobelo said.
“The only difference is the combination of strains in the H1N1 vaccine.”

Some media members at the briefing said they were not sure they were
going to get vaccinated, even though they were warned how dangerous the
flu could be. Melanie Polk, publisher of the L.A. Watts Times, for one.

Polk questioned the panel of speakers on why Los Angeles County had
chosen to begin the vaccine rollout program in Encino and Culver City,
two affluent neighborhoods, instead of some of the poorer communities.

Parra tried to reassure her that every effort would be made to ensure that all parts of the county get the vaccine.

A flu fact sheet will be handed out to all who get vaccinated, she said.

Lobelo said more information on the flu could be found on the CDC
website at www.cdc.gov/h1n1flu or www.cdc.flu.gov, or by calling
1-800-CDC-INFO.