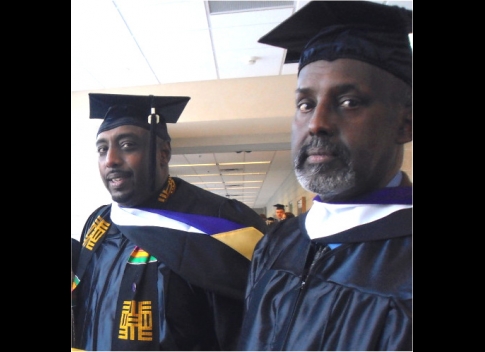 Amid the daily struggles of life in a new country and revelations of Somali youth leaving Minnesota to fight alongside a designated terrorist group, Somali-Minnesotans continue to show a tremendous strive to adjust life in Minnesota. Among the many graduating students of this year from Minnesota State University were Mohamed-Rashid Mumin and Hussein Wehelie.

Neither of these men is ordinary nor a traditional student.

Somali students in Minnesota campus hallways are a common sight but not that of 53-year-olds also attempting to complete a degree. Mr. Wehelie and Mr. Mumin’s achievements are exceptional by Somali standards. Most 53-year-old Somalis work in odd jobs and strange shifts, and are preoccupied with how to raise their kids and help relatives in the native-land, Somalia, or consumed with Somali politics.

However, while working full-time and raising big families, both Mr. Mumin and Mr. Wehelie managed to earn their degrees from a respected American University.

Mr. Wehelie and Mr. Mumin’s past success may have contributed to their continued drive to better their lives. Mr. Mumin’s late father, Abdirahman Sh. Mumin, was a prominent Somali politician and three-time minister of Somalia. He last led the ministry of defense in the late President Aden Abdulle Osman’s administration. Mr. Mumin himself was known for his role in the Somali’s professional sports. “I was a professional soccer, basketball, volleyball player … I even played at the national level with more than one of these sports.” Mr. Mumin said.

Likewise, Mr. Wehelie was a renowned and respected figure in the journalism field. Before the civil war, he was a producer and a writer for both Radio Mogadishu and Xidigta October newspaper. “I used to write for number of programs at Radio Mogadishu and was the first person to write about the “Titanic” tragedy in Somalia.” Wehelie stated.

Obviously, no success is achieved with ease or without a remarkable price. “I went through a lot trying to provide and make time for my family while going to school.” Mr. Mumin explained.  Mr. Wehelie faced similar challenges, “I used to work 3 days for 12 hours and go to school for the other four days … all of these time, and I was also helping my relatives back home.”

Even though Wehelie was a student at the Somali National University in Mogadishu when the civil broke-out, his coursework and credentials were not recognized in Minnesota and had to start over. “First, I enrolled into an ESL (English as a Second Language) program then GED (General Education Development) to prepare for the high school diploma before going on to college” Wehelie explained.

This may be a prime example of one’s resolve but could also be an indication to a possible trend.

Mr Hassan is a recipient of the 2006 Hennepin County Government Management, Administration and Policy (MAP) Fellowship and the 2007-2008 Hubert H. Humphrey Policy Fellowship. He has a B.S. from Metropolitan State University and M.A. from Saint Mary's University of Minnesota.