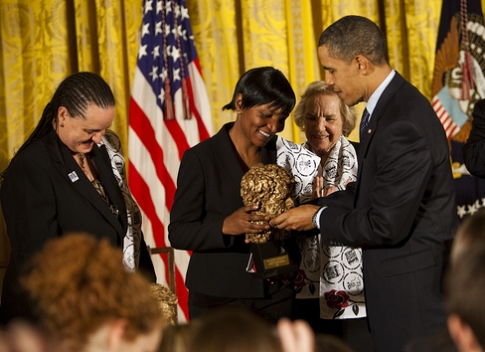 Women of Zimbabwe (WOZA), a grassroots movement working to empower women from all walks of life to mobilize and take non-violent action against injustice has mobilized hundreds of demonstrations of thousands of women across Zimbabwe, motivating mothers to take a stand against the brutal repression and neglect committed by President Robert Mugabe’s government.

WOZA’s protests have been met with repression and violence. The act of speaking up about the injustices has led their government to label the women as “unrepentant criminals.”

Ms. Mahlangu has been arrested over 30 times in the course of her work as a human rights defender. Along with WOZA co-founder Jenni Williams, she has led campaigns with WOZA supporters to address many of the most crucial human rights issues facing Zimbabwean women, including domestic violence and rape, the right to food and education for children, the rights to participation and the right to association.

The Robert F. Kennedy Human Rights Award was established in 1984 to honor courageous and innovative human rights defenders throughout the world who stand up against injustice, often at great personal risk.

The award ceremony took place at the White House and was presented to Magodonga Mahlangu on behalf of WOZA by President Barack Obama.

“By her example, Magodonga has shown the women of WOZA and the people of Zimbabwe that they can undermine their oppressors’ power with their own power – that they can sap a dictator’s strength with their own.  Her courage has inspired others to summon theirs.  And the organization’s name, WOZA – which means “come forward” – has become its impact – its impact has been even more as people know of the violence that they face, and more people have come forward to join them,” said President Obama.

The White House ceremony to honor Mahlangu sponsored by   the RFK Center for Justice and Human Rights (RFK Center), also included remarks by Kerry Kennedy and a tribute to Senator Edward Kennedy, an RFK Center founding board member from 1968-2009.

RFK Board Chair and former Chair of the Massachusetts Democratic Party Phil Johnston, introduced the President saying, “Those of us who loved and admired Robert Kennedy celebrate the fact that President Obama carries on RFK’s ideals in this White House on a daily basis.  On behalf of Ethel Kennedy, her children and grandchildren , the extended Kennedy family, and the Board of the Robert F. Kennedy Center for Justice and Human Rights, we are  honored that you invited us to the White House and we are determined to do all we can to support your work during the coming exciting and productive years.”

Magodonga upon accepting the award told an audience of two hundred, including top Administration officials, Members of Congress, and the Diplomatic community, about parents forced to choose between putting food on the table and sending a child to school. She spoke about the rise of child-headed households as HIV/AIDS, malnutrition, stress and a collapsed healthcare system continue to send mothers to an early grave. And she pointed to the alarmingly low life expectancy for a Zimbabwean woman -34 years.

Magodonga said, “While (Zimbabwean President Robert) Mugabe boasts of having degrees in violence, I and 75,000 WOZA members who stand beside me, have degrees in non-violence.”

“I feel both great excitement for the recognition of my work with WOZA and sadness because although my work has gained recognition internationally, in my own country I have been labeled an enemy of the state,” said Ms. Mahlangu. “Now I know I am not alone, the world is watching and one day (Zimbabwe) shall be a normal society – with the determination of the members of WOZA, anything is possible.”

“We are not fighting a revolution in Zimbabwe, we are leading an evolution.  And civic education is our tool to evolve the hearts and minds of Zimbabweans to build a strong, new, African democracy where respect, tolerance and accountability are key”, said Jenni Williams, co-founder of WOZA with Ms. Mahlangu.

Ms. Williams, referring to president Obama’s community organizing roots said: “Mr. President you know how invaluable community mobilizing can be. We have learnt that knocking on doors, talking with and listening to people is the way we can rebuild our nation. We call on you, to support community mobilizers who are organized to empower Zimbabweans to deliver change from the ground up.”

According to the RFK center, the award includes a cash prize of $30,000 and on-going legal, advocacy and technical support through a partnership with the RFK Center.