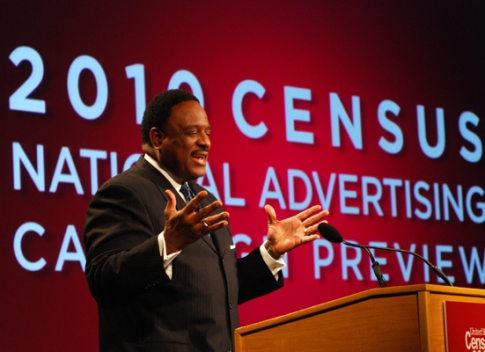 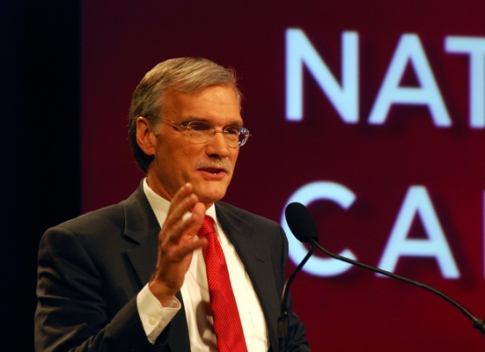 The biggest advertising campaign of the new year isn’t selling cars, beer or burgers. The $340-million effort, which made its debut with a TV spot on the Golden Globe Awards last Sunday, encourages everyone in the U.S. to be counted in this year’s census.

The 30-second commercial marked the start of a massive publicity push by the government that will include ads during the Super Bowl and the Winter Olympics, as well as advertising in several different languages aimed at some of the hardest to count communities including immigrants, African-Americans and Native Americans.

The ad campaign is part of an even bigger effort that includes 150,000 partnership organizations, and 1.5 million enumerators, people hired by the Census Bureau to go door-to-door to count people who don’t send in their census forms by the April 1 deadline.

It’s a huge mobilization of manpower and money. Even so, there is widespread concern that the government isn’t doing enough and many people will go uncounted. “Despite all these efforts taking place there is a lack of information about the census,” said Dr. Paul Watanabe, a member of the Census Bureau’s advisory committee on the Asian population.

Watanabe, who directs the Institute for Asian American Studies at UMass Boston, recently spoke about challenges facing the Census Bureau as it seeks to, “count everyone wherever they may be.”

“It’s the equivalent of a country going to war in terms of what’s required in resources and energy,” he told a group of community activists, students and college professors at the university. And while the government’s effort this year is massive, Watanabe cautioned that you can’t just “leave it up to the government to have a successful census. The participation of groups and organizations is essential, especially in hard to count communities.”

According to Watanabe, immigrant communities are among those at the greatest risk of being undercounted. He cited estimates that the 2000 Census missed three quarters of Minnesota’s growing Somali population and about half of the Cambodians living in Lowell, Massachusetts. In New York, the nation’s largest and most ethnically diverse city, the census count “has traditionally lagged well behind the national average,” according to a press release from the office of Mayor Michael Bloomberg.

Across the U.S., about three quarters of the population mailed in their census forms in 2000. But the response rates were substantially lower for Hispanics, Asians and other groups that include large numbers of immigrants.

This time, the Census Bureau is making an even greater effort to reach out to immigrant groups. But problems remain. For example, Watanabe said, the actual census form has been printed in six languages. But only forms in English and Spanish are being mailed to households. Anyone who wants to fill out a form in the other four official languages –Chinese, Korean, Russian, and Vietnamese– needs to request it through a website.

To complicate matters even more, the questions on the Census form have been translated into over 50 languages. But those versions are only intended for instructional purposes. Forms in Polish or Farsi don’t count. Only the ones in the six official languages will be accepted.

People with limited or no English, and only a vague understanding of the American system of government, could have a tough time figuring out how to participate in the census. What’s more, Watanabe says, this year’s count comes at a time of rising anti-immigrant sentiment. It’s also the first post-9/11 census, which will test “whether the government is trusted and whether the government trusts certain populations.”

Despite these obstacles, Watanabe applauds the Census Bureau for trying to reach hard-to-count populations. But he says expensive ad campaigns will not increase participation. Rather, he argues, “it’s the trusted people in communities, in families, that will enhance the count.”

According to Watanabe, one example of a potentially successful approach is the Census in Schools program, which aims to educate school kids about the count. “Who actually fills out forms in immigrant households?” he asked. “In many language-isolated communities, children act as language brokers. Reaching them is critical.”