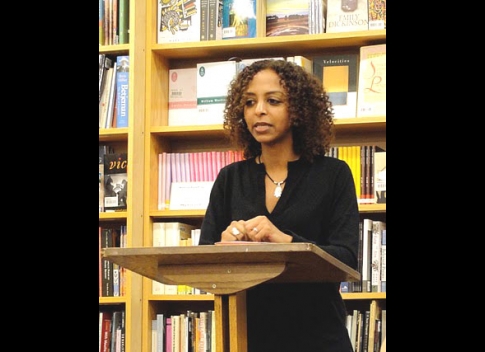 Pushcart Prize nominee, Maaza Mengiste, read an excerpt of her debut novel “Beneath the Lion’s Gaze” at Magers and Quinn bookstore in Minneapolis recently.

Mengiste read a vivid excerpt from the book to an audience of about 30 people on a Sunday night.

Her book, “Beneath the Lion’s Gaze” captures the lives of a family unraveling in a brutal environment of prewar Ethiopia in the early 1970’s. It focuses on the 1974 revolution that led to a coup that deposed Emperor Haile Selassie by members of the armed forces. When the coup toppled the archaic monarchy, it pledged to bring about a peaceful change. What followed however was cruel and inhumane violence. She has captured the brutality, turmoil and starvation people have endured in Ethiopia through the eyes of the family in the novel.

After reading an emotionally gripping passage at the Minneapolis appearance, she was asked why she chose to write about this specific period.

Although she was young, Mengiste said her memories of Ethiopia’s violent revolution have shaped the book tremendously. Mengiste said through research she was able to put historical and political events into context and write the story.

“I was very young, but the memories I do have were very vivid,” Mengiste told audience members. “I remembered snaps, different scenes and gunshots, but I had no way to put them into context.”

Mengiste is one of the few Ethiopian-American authors who have emerged in the American literature world. Mengiste was born in Addis Ababa, Ethiopia. She graduated from New York University with an MFA in Creative Writing. Her work has been nationally recognized and appeared in New York Magazine, The Baltimore Review and Ninth Letter.

Mengiste was a recipient of the Prague Summer Program fellowship as well as the Virginia Center for the Creative Arts and Yaddo fellowships. New York Magazine recently chose Mengiste as a “New Literary Idol”. The New York Times and the Huffington Post have recently reviewed Mengiste’s debut novel.

Solomon Deressa said he came to the book reading to support Mengiste. Deressa said not many Ethiopians are open to have a discussion about the traumatizing conflict the revolution brought forth.

“I am an Ethiopian and I am here to support Maaza Mengiste,” said Deressa. “We need to see more of these stories being told.”

Mengiste is amongst the many upcoming and growing African writers of our day.  Mengiste transforms the harsh reality of a traumatic event into a story about people’s struggles for freedom and happiness.

“This is just one story and there are so many individual stories out there,” said Mengiste. “I hope my book becomes an excuse for people to talk about and have an open and honest dialogue about this senseless violence.”