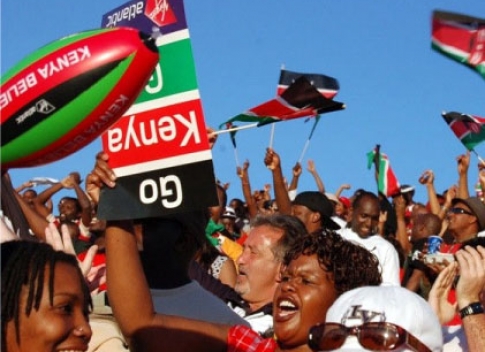 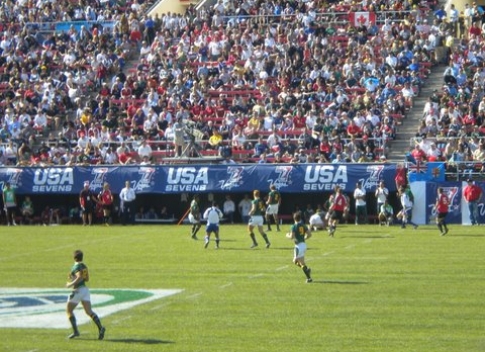 LAS VEGAS – Kenya advanced to the final four of this year’s USA Sevens but could not get to the final as they were stopped by a determined New Zealand after a 21-7 score. South Africa, the defending USA Sevens champions, could not repeat the feat this year, managing to only reach the quarter finals.

Kenya and South Africa were the only African teams participating. The USA Sevens was held last weekend in Las Vegas and is the largest rugby event in the United States. The tournament was the fourth stop of eh eight global tournaments that comprise the annual IRB Sevens World Series circuit. It brought sixteen of the world’s elite teams which played 44 matches in two days at the Sam Boyd stadium.

This was the first time Las Vegas hosted the seventh annual event. Previous tournaments have been held in Los Angeles and San Diego.

On Day 1 of the tournament, the South African team which was placed in Pool B, played against Canada, Fiji and the United States. The South African’s first game which was against Canada was impressively played, and especially more so, when Ryno Benjamin started things off right by scoring the first try which was closely followed by another try from Steven Hunt which culminated in a 31-0 win.

The Kenyan team was placed in Pool C against Samoa, Scotland and Chile. The first game got off to a rough start, but the “marked man” Collins Injera, who was easy to spot in his lime green cleats, set things right when he scored the first try in the first few minutes to the chanting frenzy of the Kenyan fans.

The game became a family affair when shortly thereafter, Humphrey Kayange scored another try after overcoming a challenging tussle with the Chileans. Kenya won that game 33-7.

The raucous travelling contingents of Kenyan fans lived up to expectations and were once again the loudest fans.  They were easy to spot in their variations of Kenyan and Rugby jerseys.

The South African Coach, Paul Treu was cautious about his team’s performance against the Canadians, he stated that “the first game is always the most difficult, but I am pleased with the result.” His team’s strategy for playing the US team was focused, “on keeping the ball, learning from the previous game’s mistakes and working as a team especially since the pitch is of unusual width”. South Africa went on to beat the US 31-12, but failed to charm the Fiji team into giving up the game, and lost narrowly at 12-5.

The Kenyan games followed those of South Africa, which worked well for the latter as they were cheered on by the loud Kenyans.

Kenya outplayed Scotland beating them 17-0 but failed to go past the Samoans falling 19-7 to the tournament’s eventual winners.

On day 2 of the Tournament, the South Africans lost to New Zealand, by a score of 12-5 but came back strong against England with a 32-14 win and another brilliantly played game against Fiji in the Plate final for quarter final losers winning 12-7.

The Kenyan team’s fortunes seemed well on the right path in a thriller of a game against England that went to a sudden death extra time with Kenya winning 26-21 to advance to the semi-finals. With all their energies spent in the battle with England, the going got tough for the Kenyans in the semis and they fell to New Zealand team which won by a score of 21-7 to advance to the final against Samoa where they lost.

All teams fought hard for the Plate and Cup at all stages of the Tournament and gave the fans an amazing insight into the discipline and passion that it takes for the athletes to perform at such a high level on a traveling tournament such as this. Las Vegas was the fourth stop on the IRB Sevens World Series, and it is the largest annual Rugby event in North America.

ABC will on Saturday, February 20, air a one hour special of the USA Sevens rugby tournament at 5 PM (EST). Check your local listings.

“In addition to the dynamic tournament coverage of the most recent Olympic sport, we will also have the opportunity to introduce the USA team to America,” said Mark S. Reilly, of USA Sevens LLC and the executive producer. “Viewers, both rugby fans and those new to the game, will find their stories compelling.”