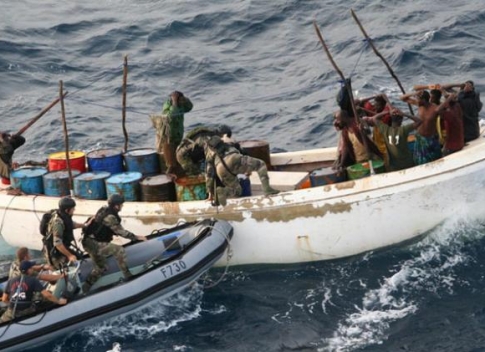 Washington — With the cooperation of the international shipping industry, there has been steady progress in the fight against maritime piracy off the east coast of Africa, a senior U.S. official told reporters March 19.

Thomas Countryman, principal deputy assistant secretary of state in the State Department’s Bureau of Political-Military Affairs, made that point while briefing reporters at the Foreign Press Center in Washington. He was joined by Donald Yamamoto, the principal assistant secretary of state in the department’s Bureau of African Affairs.

Countryman said the progress in fighting piracy has been “steady” but not dramatic and that there has been a decline in the number of successful pirate attacks in the region.

He explained that progress has been achieved on a number of fronts. In the military area, he said, “more than 20 nations have contributed to maintaining an international naval force in the Gulf of Aden. On any given day there is an average of about 17 naval ships on patrol in the Gulf of Aden. They have created an internationally recognized transit corridor that provides security for about 30,000 cargo ships that transit that corridor every year.”

What is most impressive, he said, is that “we have melded U.S., European Union, NATO and a number of ships from other countries, including from Russia, China, South Korea and Japan, that work together not under a unified international command but with a shared awareness and deconfliction system that allows the ships from different countries to work together.”

He called this effort, in which many different countries participate with only a coordination mechanism instead of a command mechanism, “fairly unprecedented.”

A second important area of cooperation and progress, he said, is with the shipping industry itself. “The lowest-cost and most effective measures that can be taken to deter and defeat piracy depend upon the vessels themselves,” as maritime crews adopt relatively low-cost security measures.

Piracy has been a threat to U.S. food assistance in the region, and Countryman said U.S.-flagged vessels are now required to employ certain practices when they are performing the very important mission of delivering U.S. food assistance to the Horn of Africa. “We think it has worked well” and resulted in a decline in successful pirate attacks, he added.

Third, Countryman cited some progress in the prosecution of pirates, calling piracy a universal crime. “Every state has both the right and the obligation to prosecute pirates,” he reminded reporters.

He said the United States encourages all states that have been affected by piracy to prosecute pirates. He cited Kenya as an example. Kenya’s prosecutions will yield more economic and humanitarian benefits for the region than if the pirates were prosecuted elsewhere, he said.

Responding to Kenya’s actions, he said, the United States, the European Union and other donors are helping the government of Kenya develop its legal system in a way that will serve Kenyans in the future. “We hope also to see other countries in the broader region perform the same kind of responsible service by undertaking the prosecution of suspected pirates,” he said.

Fourth, Countryman said, a working group has been established to provide public information to the people of Somalia, to help them realize that piracy is not the answer to their difficult political and economic situation.

Providing some background on the situation, Countryman said in January 2009, some 24 countries formed the Contact Group on Piracy off the Coast of Somalia under the umbrella of the United Nations. The group now includes 47 countries and 10 international organizations. What binds everyone together, he said, is the realization that piracy off the coast of Somalia results from the disorder that has characterized the state of Somalia over the past 20 years and that to completely address the problem, “we have to work to re-stabilize Somalia.”

Yamamoto said the United States and the international community are trying to help by working with the Transitional Federal Government (TFG) and the people of Somalia to help them realize their long-term aspirations. For that, he said, “we need to work closer together” with civil society and grass-roots groups.

Asked to describe the psychological profile of a typical Somali pirate, Countryman said no such profile has been established. What is most important, he said, is to distinguish between the young men who go to sea to commit piracy and the crime bosses who make most of the money from piracy.

“It is not hard in a place like Somalia,” where there is high unemployment and a lack of economic opportunity, “to find young men who are willing to risk their lives in an unfamiliar environment — the sea — in an unfamiliar enterprise — hostage taking for ransom — and who face the risk of violence or being apprehended and put in jail.”

To the crime boss, the young man sent out to hijack a ship is just as disposable as the small boat he is sent out in and the small arms he is carrying, Countryman said. “The primary profits go back to the individual who has financed the venture. Some of it trickles into the Somali economy. We believe that much more of it floods out of the Somali economy,” to be kept safe elsewhere, without any benefit to the Somali people.