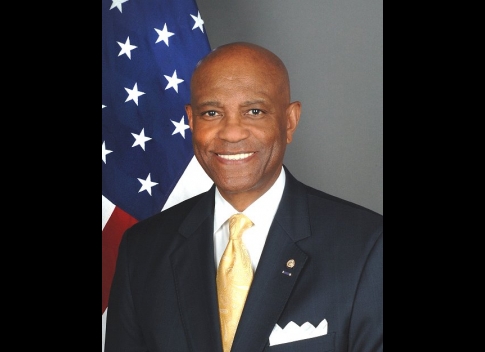 United States Ambassador to Tanzania Alfonso E. Lenhardt has been accredited as the US representative to the East African Community (EAC), becoming the first envoy to the regional bloc.

Mr Lenhardt presented his credentials to EAC Secretary General Juma
Mwapachu at the bloc?s headquarters in Arusha, Tanzania. The United
States was the first nation to nominate an Ambassador to the organization, having submitted an accreditation request on 20 April.
Ambassador Lenhardt’s accreditation to the EAC, endorsed by the
Government of the United Republic of Tanzania, expands U.S. engagement with the regional organisation comprised of Burundi, Kenya, Rwanda, Tanzania, and Uganda.

Mr Lenhardt said the United States supports the East African Community’s goals and lauded the organization for a focus on pragmatic policies aimed at improving the well-being of its citizens: “We consider regional integration to be a highly effective means of promoting prosperity through increased trade and investment.  In fact, we have pursued similar policies ourselves. With our two neighbours, Canada and Mexico, we entered into the North American Free Trade Agreement (NAFTA), which shares key aspects with the East Africa Common Market.”

Regional economic integration will also stimulate greater U.S. trade and
investment in the region: “One of the major barriers to trade between
EAC members and the United States is the high cost of doing business in the region. These high costs are in part due to unreliable
transportation infrastructure, redundant bureaucracy, and the small size
of most domestic markets. Implementation of the Customs Union and an increase of One-Stop Crossings will lower the cost of transit and enable firms operating in East Africa to benefit from economies of scale.”

Under the “Safe Skies for Africa” programme, the United States is
working to improve the effectiveness of the EAC’s Civil Aviation Safety and Security Oversight Agency (CASSOA) to enhance and maintain international aviation standards for airlines that carry businessmen, investors and tourists to, from, and within Africa.

Regional integration can also enhance East African security.  “We note
that EAC member states are considering seriously the potential benefits
of a formal Mutual Defense Protocol to promote collective security.  A
regional approach to security has worked well for my own country.  The North Atlantic Treaty Organisation has long provided collective security for the nations of North America and Europe.”

Mr Lenhardt spoke of a potential role for the EAC in the international
effort to free the shipping lanes of the Western Indian Ocean from
piracy.  He noted that, “It is a vital interest of all East African nations, including those in the interior, that the region’s trade is secure from threats posed by armed gangs operating in the waters off this region’s coast.”