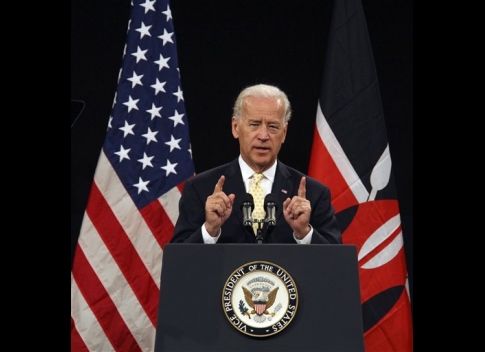 The full force of Kenya’s potential has yet to be released, Vice President Biden told university students in Nairobi, pledging to them the steadfast support of the United States as their country undertakes political reforms that will produce better governance and national unity.

Speaking at the Kenyatta International Conference Center June 9, Biden said the true wealth of a nation is not determined by its size, natural resources or military strength, but by “the skill, ingenuity and determination of its people.”

“By that measure,” Biden said, “Kenya is a very wealthy nation.”

Kenya has already become the financial capital of East Africa, building the largest non-oil, non-mineral-based economy in sub-Saharan Africa and serving as a hub for the transportation of goods and people in the region, he said. The country’s diplomats and military forces are playing positive roles on the African continent, and Kenya’s commitment to education has produced “world-renowned scientists, geneticists, environmentalists, writers and a Nobel Prize winner.”

“But the full force of your potential — as all of you young students know — has yet to be released,” the vice president said.

As the country is affected by regional instability, such as in Somalia and Sudan, and by global factors like the financial crisis and climate change, it is also confronting internal challenges such as corruption, ethnic tensions and lack of economic opportunity, he said.

“Change is within your grasp. And that change will be realized when government is transparent, accountable and participatory,” Biden said, urging that corrupt officials be held accountable, that the judiciary and police forces conduct themselves honestly, and that Kenya’s government reflects the country’s diversity.

Biden said a new constitution will establish a framework to accelerate political reforms, including placing a system of checks and balances on the branches of government, and it will provide a path toward lasting democratic stability in Kenya. Better governance is also “the best route to economic prosperity, sparking job creation, opening up opportunity and improving the way of life for Kenyans everywhere,” he said.

Better governance will also open the door to more American development programs such as the Millennium Challenge, he said. “There’s so much more we could do, and want to do, in partnership with you. It could provide millions of dollars in grant assistance to Kenya that you would know how to use well to build this great nation,” he said.

“If you make these changes, I promise you, new foreign private investment will come in like you’ve never seen and you will have a reinvigorated tourism industry that will exceed the billion dollars it was before the economic crisis,” Biden said.

The vice president said President Obama is committed, concerned and “deeply involved in the formation of our policy” toward Kenya. Kenya has “a steadfast supporter in the United States,” he said, and the Obama administration is supporting the constitutional reform process by providing assistance for voter registration and civic education that is designed to help Kenyans make informed decisions in the August 4 referendum on the draft constitution.

“I hope you will forgive me, but true friendship demands honesty. So if our words are sometimes blunt, it’s because our faith in the possibilities of Kenya [is] unlimited,” Biden said.

But President Obama has said that “Africa’s future is up to Africans,” the vice president said. “We can’t dictate it — nor should we — but you can.”

The ultimate responsibility and power rest with Kenya’s voters, rather than its political leaders, Biden said. “By your vote,” he said, “you have before you a singular opportunity to strengthen Kenya’s democratic institutions … [and] an opportunity to open up to opportunity to give a new generation new power to help Kenya realize its immense potential.”