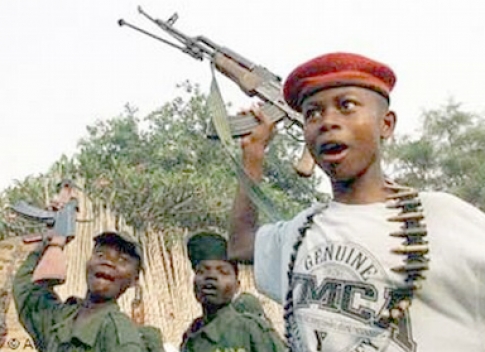 Recently, the United Nations expressed new concern about a crisis many Americans know little about: The use of child soldiers in global conflicts, especially in Somalia. Somalia, whose government collapsed in 1991, has been in a constant state of conflict and tension for years and still has no legally recognized government.

The United States joins Somalia as the only two countries in the world not to ratify the Convention on the Rights of the Child, an international treaty recognizing the human rights of children that UNICEF points out is the most widely and rapidly ratified human rights treaty in history. One of the Convention’s provisions prohibits the use of soldiers younger than age 15 in conflicts.

The United States did ratify a later optional protocol prohibiting the use of soldiers younger than 18. But in Somalia, both insurgent groups and the Transitional Federal Government — which is dependent on help from the West, especially, the United States — have been widely accused of violating this principle.

The United Nations estimates the Somali military is using hundreds of child soldiers, some as young as age nine. As one official from the transitional government told the New York Times, when it came time to recruit and equip their army, “I’ll be honest … we were trying to find anyone who could carry a gun.” The New York Times said, “Officials also revealed that the United States government was helping pay their soldiers, an arrangement American officials confirmed, raising the possibility that the wages for some of these child combatants may have come from American taxpayers.”

As shameful as it is that the United States may be inadvertently paying the salaries of Somali child soldiers, it shouldn’t be surprising. Our nation continues to allow gun violence to destroy thousands of children’s lives at home too. The Children’s Defense Fund (CDF) has documented the threat of gun violence against American children for nearly two decades since we learned in a Peter Hart Associates poll undertaken by CDF’s Black Community Crusade for Children that the number one concern of Black adults and youths was gun violence.

So, many in both generations feared they or their children would never reach adulthood because of pervasive gun violence. Although some progress has been made to reduce gun violence, it is at risk of being negated by the aggressive NRA pro-gun campaign and the U.S. Supreme Court decision relaxing the reach of gun control laws.

In our latest annual report, Protect Children, Not Guns 2010, and in a special section on gun violence in The State of America’s Children 2010, we show that in 2007, 3,042 children and teens died from gunfire in the United States — eight every day — as a result of homicide, suicide, or accidental or undetermined shootings. Almost six times as many children and teens suffered non-fatal gun injuries, which have serious physical and emotional consequences. Random violence, especially in poor communities, drives thousands of vulnerable young people into the pipeline to prison where they remain trapped with little chance of escape. Consider these other startling facts on gun violence from our research.

Since 1979 gun violence has ended the lives of 110,645 children and teens in America. Fifty-nine percent of them were white and 37 percent were Black. Fifty-six percent were homicides and 31 percent were suicides. The 3,042 deaths of children and teens from gunfire in 2007 nearly equaled the total number of U.S. combat deaths in Iraq through February 2010. More Black children and teens died from gun violence in 2007 — 1,499 — than all the military deaths in Afghanistan since America’s engagement in that war began nine years ago. Black males ages 15-19 are more than five times as likely as their white peers and more than twice as likely as their Hispanic peers to be killed by firearms.

There are over 280 million privately owned firearms in the United States, which is the equivalent of nine firearms for every ten men, women and children in our country. Recent court decisions challenging handgun bans could add to these numbers. Just as children should not be paid soldiers in armed conflicts half a world away, they also should not be forced to live in fear of the widespread armed threat in American streets, schools, and homes.

What is it going to take for adults in America to stand up and say enough to the violence that is terrorizing and killing our children? No enemy without poses as great a threat as the gun enemy within. — (NNPA)

Marian Wright Edelman is President of the Children’s Defense Fund whose Leave No Child Behind® mission is to ensure every child a Healthy Start, a Head Start, a Fair Start, a Safe Start and a Moral Start in life and successful passage to adulthood with the help of caring families and communities. For more information, go to www.childrensdefense.org.