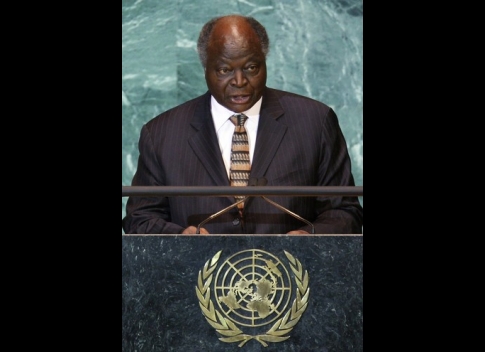 Kenyan President Mwai Kibaki today called on the Security Council to abandon what he called its hands-off approach to Somalia and strengthen the African peacekeeping force in the faction-torn country to counter the threat from Islamist militants.

“Somalia continues to suffer benign neglect from the international community leading to many lost opportunities to resolve the crisis,” he told the General Assembly on the opening day of its annual high-level segment.

“The perceived reluctance of the United Nations Security Council to engage with Somalia has been ? matter of great concern for those of us who suffer the greatest consequences of the conflict,” he added, reaffirming the central role of the UN in global governance.

He said critical proposed measures adopted by the African regional Inter-Government and Development (IGAD) group showed the way forward, calling for the appointment of an eminent high level personality for Somalia, the effective deployment of 2,000 additional troops, enhancing the capacity of the 5,000-strong African Union peacekeeping mission (AMISOM) and boosting support to the Transitional Federal Government (TFG) in its fight against Islamist militants.

“Unfortunately, the support needed to implement these decisions by the international community has not been forthcoming,” he declared. “It is against this background that Kenya urges the United Nations and the entire international community to seize the opportunity created by the African regional initiative and lend support to the proposed measures.

Somalia has not had a functioning central government since for nearly two decades, during which it has been torn apart by factional fighting, most recently between the TFG and Al Shabaab Islamists and other militias.

“Today, as this Assembly convenes, the security situation in Somalia continues to deteriorate and threaten peace and stability across the entire region and beyond,” he declared. “Needless to say the threat posed by today’s Somalia to international peace and security is greater than in any other conflict in the world.”

Mr. Kibaki also stressed the role of IGAD in ensuring that January’s self-determination referendum goes forward in southern Sudan as planned, the final stage in the 2005 comprehensive peace agreement (CPA) that ended two decades of war between the south and the central Government.

He said Sudanese President ?mar Bashir and First Vice President and Southern Sudanese leader Salva Kiir had reaffirmed to him their commitment to resolve all the outstanding issues, to hold the referendum on 9 January and accept the outcome of the vote.

“These efforts by the neighbours of Sudan and the African Union have created ? momentum that is critical to the full implementation of the ???,” he said. “It is critical that the world stands in support of these initiatives as Sudan takes critical steps in relation to its future governance.