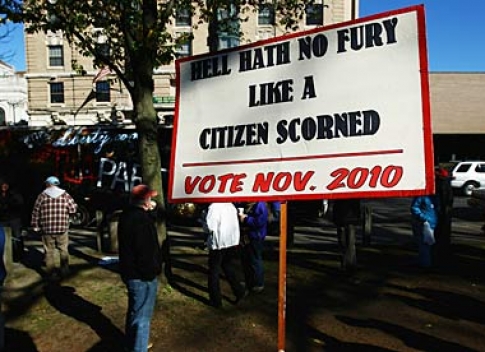 If the election of 2008 was a referendum on race, the midterms are feeling like a recount. The dominant political discourse of 2008 centered on an improbable question: Could a black man overcome decades’ worth of conservative fear mongering about scary, criminal, lazy black people and win a majority of voters? Today, things have changed. Now, the question is whether invoking scary, criminal, lazy Latinos and Muslims can incite enough conservative voters to reverse the Democrats’ 2008 gains.

Across the country, candidates are competing for the title of Best Immigrant Basher and Most Opposed to Mosques. Republican candidates have vowed that, if they win, they will turn these campaign-trail memes into congressional hearings and use them to block reforms critical to all Americans in the midst of an ongoing economic crisis. Democratic candidates, for their part, have been deafeningly silent on the subject and have vowed—well, nothing. Today’s political landscape is as frightening as 2008’s was hopeful.

Let’s review the last two years in racial politics. Post inauguration, there was an immediate escalation of the birther and Obama-as-secret-Muslim madness, much encouraged and amplified by Fox News and the fringe tea partiers it elevated to the mainstream. That brought us memorable moments like people spitting on black congressmembers and brandishing signs that were alarming for many reasons, none of them having to do with bad spelling. Rep. Joe Wilson called the president a liar during his health care address to Congress, accusing him of creating reform that would let undocumented immigrants access care (which, sadly, he didn’t). ACORN, an organization that has registered hundreds of thousands of people of color to vote over its 40-year history, was attacked for supposedly supporting prostitution by a fraudulent “journalist” dressed in racist pimp drag. Congress summarily de-funded the group, just before it was vindicated on every charge.

That was all before this election season got into swing and candidates went to new lengths to demonize people of color. During the California primary, three Republican gubernatorial candidates pinned all their hopes on vilifying Latino immigrants as criminals. Republican congressional candidates forced the nation into weeks of silly debate about the Park 51 project. They equated Islam with violence and questioned the patriotism of all Muslim Americans, helping to fuel a rash of attacks on mosques nationwide and a threatened Quran burning that spiraled into an international crisis. South Asian Americans Leading Together released a report this week documenting dozens of horrible statements attacking South Asian candidates. South Carolina State Sen. Jake Knotts called Republican gubernatorial candidate Nikki Haley “[a] fucking raghead,” adding, “[w]e got a raghead in Washington; we don’t need one in South Carolina.”

Meanwhile, voter suppression schemes are in full swing. Republican strategist Robert de Posada has launched a campaign in Nevada to discourage Latinos from voting at all, nominally because neither party is better than the other on immigration reform. In Illinois, Wisconsin and other contentious states, tea party movement activists have launched “voter integrity” campaigns in which they plan to harass people at the polls who they think might be voting illegally—meaning, they’ll profile Latinos, as well as black people.

Republican congressional leadership has pledged to amplify all of these conversations if it gains control. Senate Minorty Leader Mitch McConnell has called for hearings on the 14th Amendment’s birthright citizenship clause, as have several other Republicans in both the Senate and the House. And if campaign ads are to be believed, that’s just the beginning of what the ascendant GOP is planning for brown immigrants. From Sharron Angle in Nevada to David Vitter in Louisiana, this election has been marred by some of the most openly racist campaigning we’ve seen in decades. Angle has aired at least two ads juxtaposing white youth in classrooms with thuggish-looking Latino men, assuring voters whose “side” she’s on.

The head of Tea Party Nation, one of the largest groups* in the movement, has urged members to get rid of Minnesota Rep. Keith Ellison because he’s Muslim. And even Orange County Democrat Rep. Loretta Sanchez, who is fighting to keep her seat, got on Univision and pit her Latino base against their more conservative Vietnamese neighbors in starkly racial terms.

This is the state of our politics. This is where things have arrived in post-race America. We’re at a place where congressmembers demean crucial, inventive public policy with racist nicknames, like the one Iowa Rep. Steve King came up with to stop the expansion of the State Children’s Health Insurance Program: Socialized, Clintonesque, Hillarycare for Illegals and Their Parents. Or where President Obama’s choice to co-chair his deficit commission, Alan Simpson, compares Social Security to a “cow with 310 million tits.” That wasn’t an offense that warranted Simpson’s firing; he was given a benefit of the doubt the White House could not extend to Van Jones and Shirley Sherrod.

The Simpson comparison is apt. Throughout the past two years, Democrats have done woefully little to challenge the racism Republicans, tea partiers and Fox News have poured into the public discourse. Indeed, as with Jones, Sherrod and ACORN, the party’s timidity has often fueled the fire. If the Democrats lose next week, it’s entirely likely they will be driven even further to the right for fear of appearing soft on, well, communities of color.

This election is about something more than who will control Congress. Yes, we must all vote our consciences come Tuesday—vote and get everyone you know who is eligible to do the same. Vote early so that you can spend all day Tuesday turning out other people. But if you think racist scapegoating isn’t a replacement for forward thinking policy, then your participation cannot end when you leave the voting booth.

Regardless of who wins this election, it will have plunged us further still into the dark place in which people of color are defined as the nation’s problem rather than as the lifeblood of its future. We will have been driven deeper into a hole in which fear mongering makes possible policy choices that undermine everybody’s future. Republicans are certain to stick to their thus-far successful playbook. Democrats have shown no sign that they’ll challenge that strategy for what it is. So it will be up to all of us to demand both parties do better.