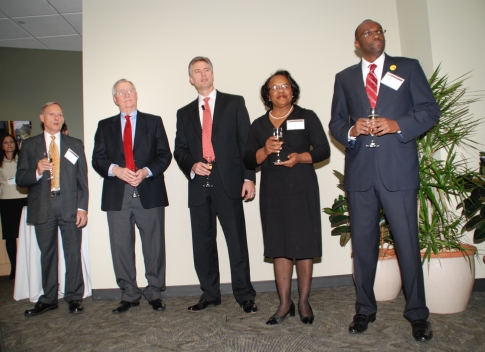 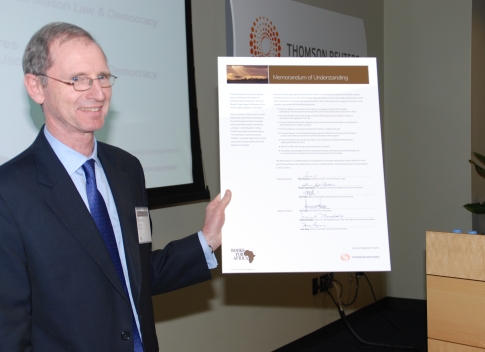 Books for Africa, the largest shipper of donated text books to Africa and Thomson Reuters – Legal, the legal publishing behemoth, on Monday signed a $1.2 million agreement aimed at supporting governing institutions and the rule of law in Africa’s emerging democracies.

The agreement signed at Thomson Reuters’ headquarters in Eagan, Minnesota, is directed at Books for Africa’s Jack Mason Law & Democracy Initiative and will include the provision of $1.2 million worth of legal education books and materials to law schools in Africa’s developing democracies. Thomson Reuters funds to offset the shipping costs of the legal texts and will continue to provide advertising, logistical and printing support to Books for Africa and the Jack Mason Law & Democracy Initiative.

Since 1988, Books for Africa has shipped 22 million books from its St. Paul warehouse and new Atlanta warehouse to fill the empty shelves of the libraries of 45 African countries.

The signing on Monday was a culmination of more than three years of collaboration between Books for Africa and Thomson Reuters.

The memorandum formalizing the partnership was signed by Board Chair Tom Gitaa for Books for Africa and CEO Peter Warwick for Thomson Reuters – Legal. Also signing in their respective roles was Mr. Walter Mondale as co-chair of the LDI, Lane Ayres as the LDI Director and Tom Pfeiffer, Senior VP at Thomson Reuters and Sharon Sayles Belton, VP for Governmental Affairs at Thomson Reuters.

Kofi Annan’s message was highly supportive saying that “the rule of law as a mere concept is not enough . . . it must permeate our lives” and that BFA/TR partnership was a needed effort to provide the tangible means to bring this about. Former Secretary-General Annan said the formalization of the partnership was a fitting tribute to the memory of his former classmate, Jack Mason.

Vice President Mondale voiced his hope that providing these much-needed books would become the means to educate role models throughout the African continent to nurture home-grown respect for justice and “the Rule of Law, including the right to vote in free and fair elections, or the right to establish a business without the threat of militia rule or extortion.”

Law and Democracy Initiative Director, Lane Ayres, whose determination made the partnership a reality, directed the hard work of selecting the more than 350 titles most critical to build resource libraries, supply classroom texts, and provide the necessary background sources on human rights. A set of more than 600 volumes required to form the educational foundation of the democratic movement toward greater nation-by-nation justice and the rule of law.

Director Ayres introduced Christina Holder, an attorney with field experience in Zambia, and Masango Matimura, a U of M Humphrey Fellowship scholar from Zimbabwe. Ms. Holder told Mshale that the concept and the desire for the rule of law were there, even in the rural areas of Zambia, and that education was the key to making it a reality.

Masango Matimura had been a community organizer in Zimbabwe and is a Humphrey Fellow at the University of Minnesota Human Rights Center Law School. He told Mshale that the momentum for the establishment of the rule of law as a human rights authority must come from the people in the local communities. Mr. Matimura said that local leaders will see the benefit of the rule of law for themselves and for their community members when the practical benefits are made available to them by fellow Zimbabweans schooled in the application of justice and human rights. Without the textbooks supplied by this collaboration, such a movement would not be possible.

Mr. Matimura said he would urge members of the African community of the Twin Cities to “take advantage of the opportunity while here in America to get the benefit of learning and experience to bring a positive influence back home”, underscoring the theme of the formalization ceremony between Books for Africa and Thomson Reuters-the need for education and the physical means to make that possible–22,000 books per year to feed the hunger of African nations for justice, democracy, and the rule of law.