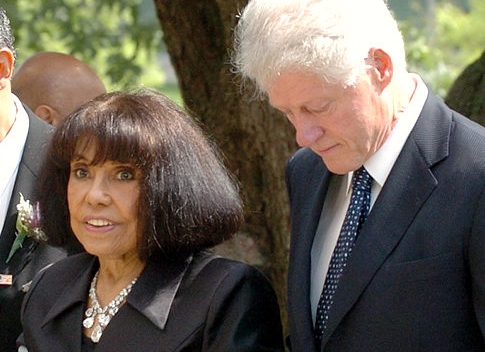 Macy’s Department Stores and Johnson Publishing Company are partnering to present a beauty, fashion and lifestyle tribute to the life of legendary style maven, Eunice Johnson. The Ebony, Fashion Fair Cosmetics & Macy’s Celebrate Eunice Johnson retrospective, will debut at Macy’s Herald Square in New York City on January 27th thru February 1st, and will then tour 10 Macy’s locations across the country throughout the month of February.

In partnership with EBONY and Fashion Fair Cosmetics, Macy’s will showcase some of the haute couture designs from Mrs. Johnson’s private collection that were featured in the famed Ebony Fashion Fair shows. The month-long exhibit will feature designs by some of the World’s most renowned and critically-acclaimed designers, including Lanvin, Yves Saint Laurent, Vivienne Westwood, Carolina Herrera, Stephen Burrows and B. Michael to name a few.

“It is a honor for Macy’s to stage a celebration of Eunice Johnson’s contributions to fashion, beauty and American history ,” say’s Martine Reardon, executive vice president Marketing, Macy’s Inc. Reardon continues, “This is a wonderful opportunity for us to partner with one of America’s most iconic and revered lifestyle authorities. Through the Ebony Fashion Fair shows, Mrs. Johnson filled a void in fashion by producing runway presentations that brought a new sense of style, drama and diversity to the industry, and we’re excited to present a glimpse of these historical shows to our customers.”

Johnson Publishing Co., chairman Linda Johnson Rice said, “It is a sign of my mother’s determination, confidence, and creativity that more than 50 years after launching the renowned Ebony Fashion Fair show, her timeless sense of style endures as a guidepost for today’s fashion loving women. We are honored that Macy’s, a 30 year retail partner of Fashion Fair Cosmetics, selected Eunice Johnson as the anchor for these exciting exhibits.”

In addition to New York City, the retrospective will be on exhibit at the following locations: