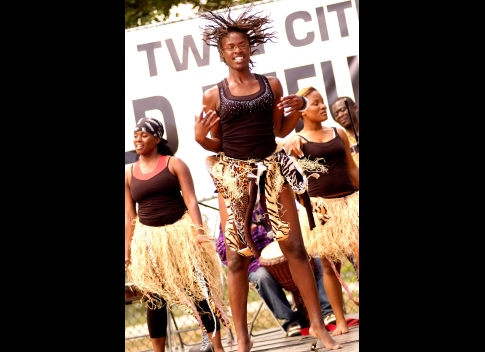 At World Refugee Day, participants celebrate the cultures and traditions of the nearly 100,000 refugees who call Minnesota home.

Though the 35 year-old has endured physical torture, a gutsy escape from his war-torn homeland, and life in a refugee camp, the Burmese native said his move to Minnesota in 2004 meant being born again.

“It is like a new beginning,” he said, about his experience as a refugee. “Everything is restarted again.”

Dwe said he showed his support and concern for the 2 million people world-wide who share his refugee status, many who have not had his luck, when he told his story before a small crowd at Twin Cities World Refugee Day on Saturday, June 25.

“They don’t have a voice,” Dwe, an honorary chair of this year’s event, said. “So we are here to speak on their behalf.”

More than 20 local nonprofit and government organizations came together to honor, celebrate and welcome the more than 100,000 refugees from all over the world who currently reside in Minnesota at the fifth annual Twin Cities World Refugee Day in Minnehaha Park.

“I would hope refugees come away from this with a sense of pride,” Alexis Walstad the planning committee chair for the event, said. “The Twin Cities has one of the largest refugee populations in the country.”

The event offered cultural and international awareness by providing participants with the opportunity to enjoy food, crafts, and performances from all over the world. In addition, the celebration included an education tent featuring exhibits and activities that highlighted the daily struggles and human rights issues experienced by refugees.

“The best part is seeing people perform their traditions,” Dwe said. “It tells me there are people from all over the world who have suffered like I did.”

For those all too familiar with those human rights issues, Twin Cities World Refugee Day provided a different type of education—information for refugees new to Minnesota on where to go for help.

Nearly two dozen community organizations participated in a resource fair that addressed every need of a newly arrived refugee or immigrant, including language skills, employment and health.

“Too many immigrants come to this country for hope and change and don’t know how to find it,” Mohamed Hajin, from the city’s Neighborhood and Community Relations Department said.

Hajin helped host one of the booths which provided information about the program where he welcomes new residents to Minneapolis by providing one-on-one support to new families.

He knows first-hand how difficult the transition can be. In 1982, he came to the United States as a Somali refugee and said he experienced the helpless feeling that comes with learning a new way of life.

“You have to learn everything all over again,” he said. “It’s important to know where to look for help.”

He said one of the best things about the event is its ability to grant immigrants and refugees comfort and support during a difficult transition.

IBé Kaba said he wishes he would have found that type of support when he arrived from Sierra Leone.

Originally from Guinea, he said he felt alone when he first arrived in the United States, and with nobody to speak his native language with, he has all but lost that aspect of his culture.

“An event like this would have been nice,” he said, pointing out the fact that all continents were represented on the stage throughout the afternoon.

Kaba, a spoken word artist who has participated in the event every year in some capacity, said Twin Cities World Refugee Day also draws attention to the willingness of many Minnesotans to open their arms to new neighbors.

“The event is definitely growing every year,” he said. “The audience is engaged and willing to learn more about what is going on in the world.”

Despite a steady drizzle and dark, looming clouds, Walsted estimated attendance would equal its yearly average of 1,500 participants.

This year marks the first time the event received grant funding to help cover expenses. It was funded, in part, by the Minnesota Arts and Cultural Heritage fund, which was appropriated by the Minnesota State Legislature after a statewide vote. In addition, many of the participating organizations helped sponsor this year’s festivities.

In 2000, the United Nations General Assembly declared June 20th World Refugee day. Since then, people around the world have used events like Twin Cities World Refugee Day to draw awareness to refugee issues and honor their resilience, according to Walstad.

Dwe said Twin Cities World Refugee Day gives those adjusting to life in Minnesota a chance to connect with those still enduring suffering in their native countries.

“We are sending them a messaged and a wish,” he said. “I am sending my heart out to them today. We all are.”