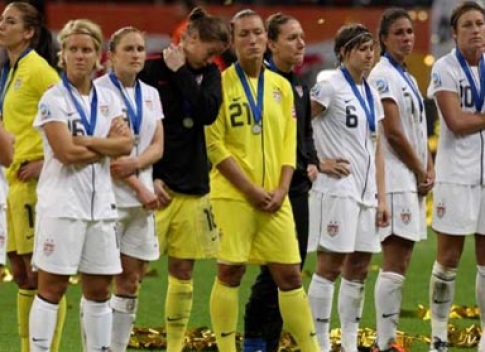 What a thrill. What pride. What a show of skill and prowess by the U.S. women’s national soccer team in the 2011 Women’s World Cup even as they lost in penalty shots to Japan on Sunday.

Too bad that this fabulous squad does not yet look like America.

Wambach made magnificent header goals; Rapinoe, great centers; Boxx, streaking shots from outside the box. I cheered them along, as they deserved to be cheered, and relished their hard-fought battle on behalf of a nation.

But my feelings were bittersweet. In a roster of 21 players, there are only two Latinas and no Blacks or Asians. In the team picture of bright, young, exuberant and inspiring faces, the hues and shades of an increasingly multicultural America are quite limited.

There is something deeply amiss in the lack of diversity on both the women’s and men’s national soccer teams—not only because one-third of the nation is missing in their composition, but because when we look at the age range of those who play soccer professionally, the gap is even more striking: 40 percent of this age group are people of color.

Given soccer’s popularity, particularly in the Latino community, the lack of diversity cannot be excused. While it can be said legitimately about golf, tennis, and swimming that the pipeline of diverse talent iis significantly limited given low participation numbers by minority children, the same cannot be said about this most populist of sports, futbol.

Yes, golf, tennis, and swimming must find ways to get more minorities involved, not only for the sake of these marginalized communities, but also for the sake of the vitality of these sports. By limiting the talent pool, is it any coincidence the United States has not dominated in golf or tennis in the past decade? Soccer has a huge built-in advantage over these other sports, even as the U.S. Tennis Association (USTA) significantly steps up its efforts to introduce tennis to 10-year-old kids of color. But colleges, the U.S. soccer teams, and pro-soccer farm systems are bypassing the massive number of female and male players of color in soccer .

As one looks at the player roster both in women’s and men’s soccer, how is it that diversity in this sport has been whitewashed?

When I played varsity soccer at Northwestern University, I was the only Latino on the team—and a walk-on from South America, not a Hispanic American—and Floyd was the only black. Granted, Northwestern’s student body was not especially diverse to begin with, but surely in the soccer subculture there should had been some sort of over-indexing of diversity.

To increase the diversity of the U.S. teams—not only be truly America’s team, but to ensure that U.S. teams remain competitive—an all-out diversity effort must be launched.

First, more minority children must be enrolled in the largest soccer youth programs. When I coached my daughter’s soccer team, the $100 fees were out of reach for many working-class Latino families. To the league’s credit, it began instituting a sliding-scale fee funded by local individuals and companies. But while this increased Latino participation a bit, the lack of relations between the white and Latino communities made it hard to spread word about the program.

And even when more Latino kids did participate, coaches— many new to the sport of soccer themselves— did not know how to reconcile the differing expectations from Latino parents when practice schedules conflicted with work schedules at the family store or other business. The “no practice, no play” principle killed any nascent enthusiasm among working-class and immigrant kids and parents.

The barriers to entry in the more competitive youth travel soccer leagues are even higher, given the $1,000 fees and faraway road games that assume parents have cars and free weekends to schlep their cleat-clad kids.

But the institutions that truly have no excuse for the lack of diversity on their soccer teams are colleges. Thousands of girls and boys nationwide are playing in soccer at their public middle and high schools. Here participation is free, school buses transport the teams to their matches, and Immigrant parents have at least some working knowledge about school culture that they don’t have about para-organizations such as AYSO (American Youth Soccer Organization) and travel soccer.

Title IX, which demanded the playing field be evened out for collegiate women in terms of budgets, facilities and scholarships, is the No. 1 reason women’s sports in the U.S. have risen to the world-class caliber we saw in Sunday’s World Cup finals match. But as in corporate America, women’s gains in soccer have unfortunately ended up being white women’s’ gains, with Black, Latina, Asian, and Native American women conspicuously absent as beneficiaries of powerfully important gender-diversity programs.

To break through, we need U.S. Soccer, college soccer scouts and parents to shift their assumptions and behaviors.

In machista societies like the Latino one, girls have to be seen as legitimately able to compete in sports for fun or career, just as boys are. Scouts need to get comfortable going into the barrio and inner-city schools and to suburbs dominated by immigrants, just as football and basketball scouts started doing a generation ago.

And U.S. Soccer can up the ante by insisting that its scouts and coaches source greater diversity for players considered to be called on to wear the U.S. uniform.

Because that uniform belongs to all of us.

Andrés Tapia is president of Diversity Best Practices, a diversity and inclusion think tank and consultancy.