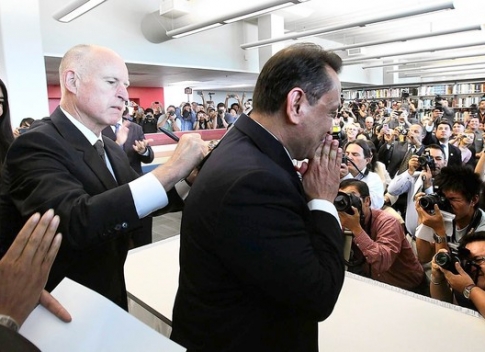 The California Dream Act, Part A (AB 130) was signed into law Monday by Gov. Jerry Brown during a town hall meeting in Los Angeles hosted by Democratic Assemblymember Gil Cedillo, who sponsored AB 130 and its companion bill AB 131.

AB 130 allows the states undocumented college students to access privately funded scholarships. Its companion bill, AB 131, would allow undocumented students access to the same public financial aid U.S. citizens and legal residents are entitled to. AB 131 has not yet reached the Senate floor.

Although the two bills are referred to as the California Dream Act, they do not include a path to legalization for undocumented students. That provision is unique to the federal Development, Relief and Education for Alien Minors (DREAM) Act, which would grant conditional legal status to qualifying undocumented youths brought here before age 16 if they go to college or enlist in the military.