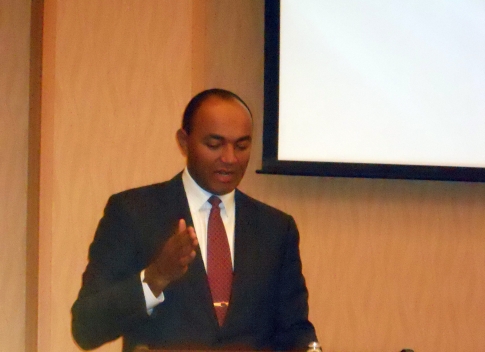 BROOKLYN CENTER, Minn. – The campaign for the presidency in Kenya has not officially started but the jockeying has begun.

Among those widely believed to be gunning for the top seat in Kenya is Peter Kenneth. He is an elected Member of Parliament for Gatanga constituency in central Kenya and an Assistant Minister for Planning, National Development and Vision 2030. Vision 2030 is the national strategic plan for Kenya by the Mwai Kibaki administration.

Mr. Kenneth has been on a US meet the Diaspora tour and made his last stop in Minnesota last Friday at a local hotel.

The youthful politician is the first among what is expected to be a trove of visiting aspirants for various public offices soliciting for support from the influential Kenyan Diaspora community. The visits typically start happening about a year before campaigns begin.

Along with Massachusetts, New Jersey and Texas, Minnesota is one of the big population centers for Kenyans in the United States and is considered a ‘must visit’ for any serious candidate for high office.

At a meeting attended by about 100 people, Mr. Kenneth addressed a wide range of issues particular to the portfolio he holds in government. Sounding very much like a candidate, he however refused to announce whether he is running for president deferring the decision “to an opportune time”. He however hastened to draw a clear distinction between himself and other young politicians also running for president. He said some of the young politicians that want to be president have in the past joined in the ‘fleecing of Kenyans’ and are no different from the old guard that Kenyans want to replace.

On issues of particular interest to the Diaspora, he confronted those head on. “There is no real estate bubble in Kenya”, he said in response to a question that real state is overpriced in the country. He said that in reality the Diaspora community with the remittances they send are contributing to the skyrocketing cost of real estate, as they are among the key top in the sector.

He also suggested a more “strategic” use of the remittances the Diaspora sends to the country. In a Q & A that took up most of the meeting, Mr. Kenneth gave a vision of Kenya with a modern infrastructure and adequate security. On infrastructure he said a lot of change has happened in the country for the better but that “more needs to be done”.

What did the audience think of the visit, one participant said “If only Kenyan politicians acted like Peter Kenneth was saying, we could have not been addressing these issues. He answered questions in the right way and hopefully his gatherings make a difference”.