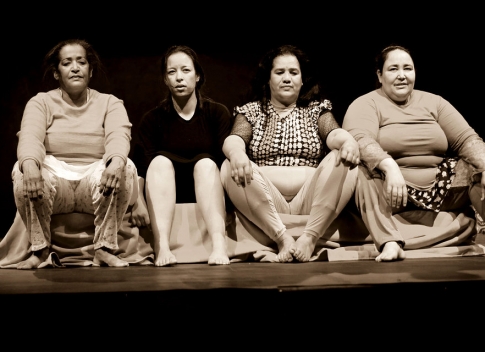 “Much of their performance was pedestrian,” said Maja Brunes, dance major graduate from Main Street School of Performing Arts in Hopkins and admitted dance major to the University of Minnesota.

Her summary stopped me. In my mind, Voices of Strength, which performed for three nights-October 10 – 13-at the Walker Arts Center in McGuire Theater, exposed me to an entirely new approach to dance. How could something so revolutionary be pedestrian?

No, not pedestrian in the sense of banality or unexceptional, she clarified, but in the fact that the four women who performed Madame Plaza depicted everyday actions such as sitting on a couch waiting or gathering in community and forming teamwork; it was almost theatrical in its storytelling, Brunes told me.

The whole experience begs the question, what is dance? Previously, I understood dance to be a response to music using one’s body to show kinesthetically the effects of the music. Even if it’s dramatic such as a ballet, it is still easy to understand the dancer has taken on the role of a cursed swan or a scurrying mouse, for instance.

Further, I’ve always associated dancers with lithe bodies and sinewy ropes of muscle enabling them to propel themselves off the floor complete with bounds and twirls. This stereotype did not fit three of the women who performed Madame Plaza. Their curvaceous bodies alone unseated my image of dancers.

Voices of Strength, a collaboration of work by five artists from Africa, portrays the story of the African woman. The artists bring their stories to the audience with unique ways of interacting with both objects and to one another.

For Brunes, she found herself emotionally gasping over the seemingly simple act of one dancer, creator and performer Bouchra Ouizguen of Morocco, picking up another dancer from behind and carrying her across the stage. “I can’t explain it,” said Brunes, “but I felt like they were working toward creating community.”

The first presentation, Sombra, on Thursday evening, October 11th, was a solo performance by Mozambican Maria Helena Pinto. Unexpectedly performed with the dancer wearing a large plastic bucket over her head and resting on her shoulders, Pinto spoke of the invisibility and absence of voice of women in Africa through both her body and her lack of words.

There were no pirouettes or dramatic leaps. Instead we watched Pinto repeatedly walk across a long row of upturned buckets and weave in a sporadic fashion through an equally long row of buckets hanging from the rafters. At times, she struggled to fit her entire self in her own bucket, rolling and writhing on the stage floor.

Her twenty-three minute piece ended with the startling act of her bucket flying off her head and out of sight. Within minutes of revealing her face, she made eye contact and warmly thanked the audience for attending although still without words.

Brunes noted that the performance began in black, transitioned to partial light and ended with Pinto walking into the light. This coincides with the program notes that include three translated poems that relate the idea of shadow, moving from non-existence, and finally seeking enlightenment.